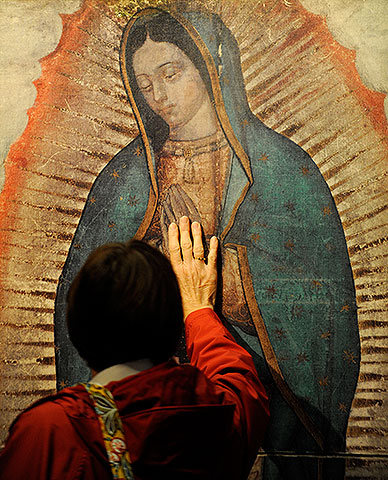 PITTSFORD — Ryan Tomko and Christine DiNovo carefully moved the life-size image of Our Lady of Guadalupe on the altar of St. Louis Church to face 8-year-old Max Charleton.

Max suffers from global developmental delays and is in a wheelchair. His mother, Janine, pushed him on the altar once the image was turned around so that Max could touch it.

She said that she had no words to describe that moment.

"Obviously, it was very moving," Charleton said with tears in her eyes. "I’m very devout to our blessed mother Mary. And I pray to her very often. I know that through her, there are special healings and blessings."

Charleton, a parishioner at St. John of Rochester Church in Perinton, was one of hundreds who stopped to venerate the 4-foot by 6-foot image of Our Lady of Guadalupe after Masses on Oct. 28 at St. Louis. Mary appeared as a pregnant indigenous woman on the tilma of Juan Diego, an Aztec Indian, in 1531. That original tilma is displayed at the Basilica of Our Lady of Guadalupe in Mexico City.

The digital file from which four missionary images of the tilma were created was blessed by Pope John Paul II to embark on a new evangelization, explained Christine DiNovo, a new parishioner who arranged for the image to come to Rochester.

The image at St. Louis was certified and blessed at the basilica to bring conversions, reverence for life, sanctity of the family and solidarity of the church, DiNovo added.

As Mary appears with a pregnancy sash in the image, Pope John Paul II also named her the protectoress of the unborn. DiNovo said that she would someday like to bring the image in front of the offices of Planned Parenthood.

"I really believe I was inspired by Our Lady of Guadalupe to do more (for the unborn)," she said.

Kathleen McMahon, social-justice director for St. Louis, said Our Lady of Guadalupe’s image was so well-received by the community that she kept running out of prayer cards after each Mass.

Joan McCarthy from Women’s Care Center associates the image with a miracle that happened at the center when the image came there in 1992, she said.

A silver crucifix touched the image during that visit at the center, and "in front of 14 witnesses, it went from silver color to a bronze color," McCarthy remarked.

The crucifix remains that way to this day, she said as she placed it next to the image at St. Louis.

Catherine D’Anza of Penfield is praying to Our Lady of Guadalupe for a miracle to heal a friend of her daughter, Isabella. The friend is suffering from brain cancer, she said, and the children have been classmates at St. Louis School for many years.

"She’s just so beautiful and has such a calming presence," D’Anza said of the image. "We all could use her motherly blessing."

The thousands of people who have been affected by her image is remarkable, noted DiNovo, who became familiar with the tilma’s missionary image while planning the Syracuse Catholic Women’s Conference about three years ago. An acquaintance — who is part of the Apostolates of Jesus King of All Nations, The Missionary Image of Our Lady of Guadalupe and Our Lady of America based in Vermont — offered to try and arrange for the image to be at that conference.

"We were very fortunate to have that image," noted DiNovo. "People venerate this picture. Miracles have happened."

As she has continued work on the conference, she has been fortunate to bring back the image every year, added DiNovo.

Earlier this summer, her family moved to Pittsford and joined St. Louis Church, she added. She knew she would have the image again for the Syracuse conference and wanted to do more but was feeling overwhelmed with the move, DiNovo explained.

But she mentioned it to McMahon and the idea to bring the image to the church was born, she noted.

"It was kind of an unexpected blessing," added McMahon.