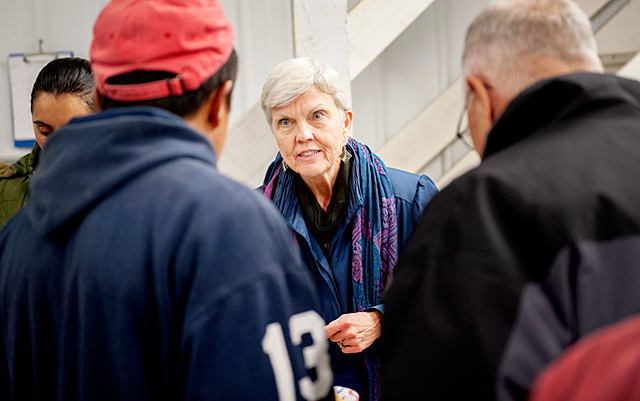 During her tenure as migrant minister, Penny Gardner established relationships she could not have imagined when she accepted the job with the Diocese of Rochester.

She is retiring nearly seven years later, but some of those bonds will be lifelong, she said.

"They are the children and grandchildren I never had," she said of the families she has grown to know and love through her ministry to migrants in the northwest region of the diocese.

"She started in a difficult position," he said. "She had a lot of things to create, initiate and rebuild."

Gardner stepped into the position on the heels of the departure of two migrant ministers in the span of a couple of years. And the missionary principles — to reach out, serve and nurture — she employed in her ministry shaped her work with the community, Grizard said.

"She really succeeded in ways of shaping the ministry," Grizard remarked. "She’s definitely a missionary at heart. … And we should be thankful."

Gardner not only gave a voice to the voiceless by tirelessly accompanying and advocating for migrant families who faced legal dilemmas, but also guided them in ministry through faith formation and retreats, Grizard explained. In addition, she made sure migrant families were part of planning groups for Hispanic Ministry.

And in Livingston County, she helped parishes connect and engage with the migrant families in the area, he added.

"She made a valiant effort to establish communication and collaboration between Latino migrant families and the local English-speaking parish communities," noted Father Jesús Flores, coordinator of migrant ministry. "This constant interaction and contact with the Anglo parishes has raised the consciousness of the migrant community’s reality."

Although it was a difficult decision to leave that work, Gardner said she realized last spring that the timing was right for her retirement. Her last day was Oct. 24.

"There are moments when the reality of my decision feels bittersweet," she said. "In the more bitter moments, I remind myself that the word for retirement in Spanish is ‘jubilarse,’ which is like the biblical concept of jubilee."

Grizard said diocesan officials have met with pastors from her region in an effort to identify a replacement.

"The next person will bring gifts and will take the community in a different direction," Gardner added. "And that’s all good."

Garder followed a circuitous career path. For 27 years, she was a Sister of the Immaculate Heart of Mary, working in such places as Far Rockaway, Long Island, and also served a five-year missionary stint in Peru until 1994. Following her missionary work in Peru, Gardner, who grew up in Oneida, Madison County, came to live in Fairport with her sister for a year to discern whether to stay with or leave her religious order.

She said she fell in love with Rochester and with the former Corpus Christi Parish, where she met her husband, Charlie. They married in 1998.

Through Corpus, she also stepped into the next phase of her journey at the former Mercy Outreach Center. (In 2011 the center merged with Mercy Residential Services to form Mercy Community Services.)

Gardner spent 14 years at Mercy Outreach Center, the last three as its director, and realized working as an administrator was not for her. "I’m a people person," she said.

So, she stepped down in 2007 and didn’t think she’d face any difficulties finding another job, she said.

Diocesan officials had suggested the migrant ministry position but she was unsure about the long drive from her home in Livingston County to Brockport’s Church of the Nativity of the Blessed Virgin Mary. But after trying a couple of other jobs, Gardner said she opted to undertake migrant ministry and began in February 2008.

As many of migrant families in Brockport permanently settled in the area, the community’s needs evolved over the years, focusing more on faith formation and sacramental preparation, she said. During a recent farewell Mass for her, comments made by some of the parishioners were heartwarming, Gardner said.

Those well wishes were well-deserved since Gardner made it clear on day one that she was dedicated to the Brockport community, said Delia Puente, a Nativity parishioner.

Gardner helped prepare Puente and her friends for confirmation and helped them with making a difficult decision to live independently, Puente added.

"Penny was our teacher and taught us well. She is one of a kind because she believed (in us) and succeeded. She leaves us now because she knows it’s time for us to mature as a community," Puente wrote in an e-mail. "For my family and me, Penny has been one of us, part of our family. She is a good friend, always positive, always happy and with a great sense of humor. Of course, she has touched our hearts and she will always be there. I will never forget Penny."

Retirement will not not break the bonds she has formed, especially with some of the families in Livingston County, where she will continue to volunteer when needed to drive people to appointments or translate for them, Gardner said.

While Puente called her a good teacher, Gardner said that the migrant families she has known also have provided valuable life lessons.