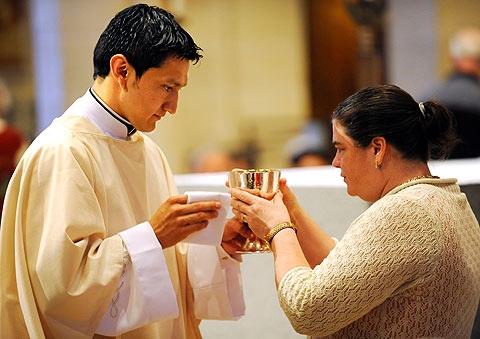 A restructuring of the department that provides multicultural services in the Diocese of Rochester should strengthen the work done at parishes and ensure that all communities are represented in decision making, diocesan officials said.

As a result of the reorganization, the offices of deacon personnel, vocations and clergy services, health care and prison ministry — formerly located in the diocese’s Human resources department — also fall under Grizard’s jurisdiction, he said.

Another new aspect of the reorganization is the office of cultural diversity, which will be overseen by Lynette Saenz, Grizard said. Within the diversity office, Brother Juan Lozada will focus his ministry on Hispanic family life, including evangelization programs and resources that support Hispanic families and reach out to inactive Catholic Latinos, Saenz added.

The work of urban ministry, which includes helping the marginalized and poor, will now fall under mission and outreach services coordinated by Sister of Mercy Janet Korn, Grizard said. Because of its unique nature, the organization and leadership of migrant ministry will remain unchanged, he added.

Brother Lozada said that he hopes his new mission will bring more Latinos back to the fold. Currently, only a small percentage of the approximately 30,000 Hispanic Catholics in the diocese attend weekly Mass, he noted. The Hispanic Encuentro process, which this summer will gather parishioners from throughout the diocese to give input on ways to better meet the needs of Latinos, should also help with this work, he said.

"We need to reach out," said Brother Lozada, who added that such traditional devotions as novenas could be used to reach family members who are no longer part of a parish community. "The places where people gather; that’s where we need to be."

In addition to Hispanic ministry, the new cultural diversity office also will incorporate the offices of black ministry and Asian/Pacific ministry, Grizard explained. To help manage the scope of that work, the staff is now in the process of creating commissions that will be managed by Saenz. These groups will include parishioners from all related ethnic groups and will provide input on how the diocese should deliver services and meet the needs of different cultures, Saenz noted.

"We’re trying to support what’s really happening in a parish in a sense," she added.

The yet-to-be-formed Latino commission will include the existing Committee for Hispanic Youth and Young Adult Ministry, she added. Continuing-education opportunities also will be available to Hispanic lay leaders through an expansion of formation programs offered by the Instituto de Pastoral Hispano at St. Bernard’s School of Theology and Ministry, Saenz said.

"We’re trying to create a structure where people get more involved," she said. "It’s a new thing. We’ll see how it develops. The goal is to make sure we have adequate representation for the diocese’s cultural groups and for what happens in diocese."

Overall, the office’s aim is to focus on ministry when it comes to providing services to the diocese’s ethnic communities, she added.

"We want to make sure that what happens has a positive impact on all communities instead of benefitting one and not the other," Saenz said.

Providing parish communities with support in such areas as faith formation also helps parishes that have gone through a lot of changes and transitions in recent years, Brother Lozada said.

"You might go to a community and they’ll say, ‘We do that (ministry) now.’ But there is nothing structured," he explained. "There has to be something constructive and deliberate and well-programmed."

The changes also going on in the diocese — with the Hispanic Encuentro and Bishop Matthew H. Clark’s upcoming retirement — ultimately provided the diocese with an "opportune moment" to prepare for whatever comes down the pike, Saenz said.

"We need to address the issue of diversity so we can grow and be successful," Grizard said. "And we need to highlight the gift of diversity and not as a problem to be solved."