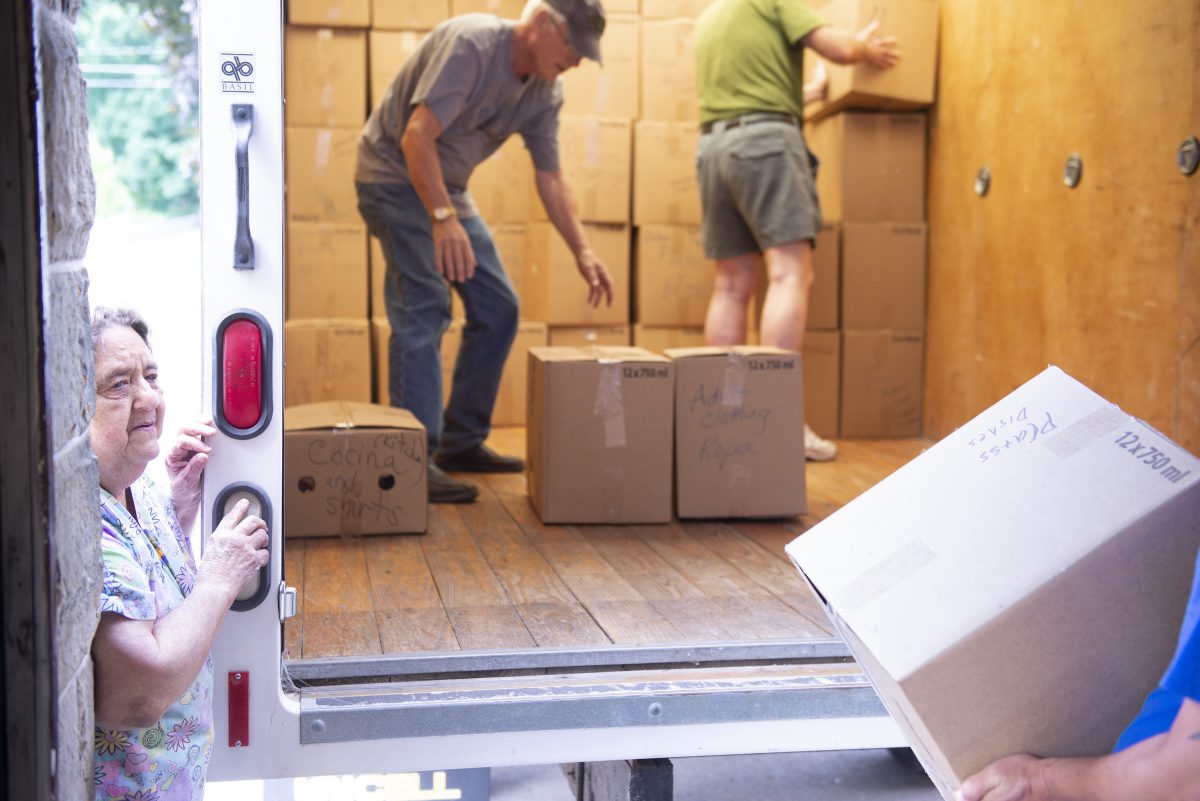 Ann Marie Zon looks on as boxes of donated items are packed into a truck for the Nicaragua Project at St. Patrick Church in Seneca Falls on Aug. 24. Each year for at least the past 25 years parishioners and others have collected tons of items for the needy in Nicaragua.

Stacks of boxes, neatly labeled in both English and Spanish, are a familiar sight around St. Francis and St. Clare Parish, which has worship sites in Waterloo and Seneca Falls. Parishioners gather at the garage behind St. Patrick Church in Seneca Falls each Saturday from April through August to pack those boxes full of items donated by fellow parishioners and members of the local community.

The boxes contain everything from clothing for children and adults to dishes, sports equipment and school supplies. At the end of the summer those donated items are sent to needy families in Nicaragua by way of a tractor-trailer truck bound for that country. It’s a process that has been repeated each August for 25 years.

This year, political unrest in Nicaragua has forced the parish volunteers to limit the amount of items they send and to turn some would-be donations away entirely, according to MaryAnn Bender, one of the parishioners who coordinates St. Francis and St. Clare’s Nicaragua Project.

“One of the most heartbreaking things is that we’ve had to turn away so many things that we know (the Nicaraguans) could use,” Bender remarked. “In other years, we’ve been able to take things like wheelchairs and crutches. This year, we can only take things that can go into boxes.”

St. Francis and St. Clare’s Nicaragua Project is part of a larger project known as the Nicaragua Mission, which is run by a lay missionary from the Buffalo area who spends more than six months of each year living and serving the needy in the Central American country. This missionary, Ann Marie Zon, contacted Bender this past spring to tell her that the situation in Nicaragua was forcing her to make some changes to the mission.

In April of 2018, Nicaragua’s president, Daniel Ortega, announced that social-security benefits would be cut. Many citizens protested against the cost-cutting move, and government forces responded to the demonstrations, which turned violent. Ortega revoked the social-security reform package later that month, but since the initial demonstrations, more than 300 people have been killed and thousands injured during government crackdowns, according to National Public Radio.

International human rights observers were expelled from the country in December 2018, according to NPR. Media outlets that had been critical of the Ortega administration have been raided or shut down, and after two journalists were jailed, many more fled the country or went into hiding, according to The Washington Post. And a travel advisory issued April 3, 2019, by the U.S. Department of State urged U.S. citizens to reconsider travel to Nicaragua due to civil unrest, limited health-care availability and arbitrary enforcement of laws.

In the midst of this, some shipping containers full of humanitarian aid were not being allowed into the country, Zon told Bender this past spring. The lay missionary was worried that any items collected through the Nicaragua Project would not make it into the hands of the Nicaraguans who needed them, Bender said.

“Although we had already started packing, (Zon) said she may not be able to take anything,” she recalled.

However, the priest working with Zon in Nicaragua urged her to tell parishioners to keep collecting donations and packing boxes, Bender said.

“The people down there are more desperate than ever because there is a ripple effect,” Bender said. “Now, because in the last year no tourists are going down, people are out of work because restaurants are closing, hotels are closing.”

Zon decided to come to Seneca Falls with a smaller box truck and fill it with boxes containing certain priority items, such as children’s clothing and very basic school supplies like pens, pencils and paper, Bender said.

Volunteers sorted out the priority items and prepared them to depart with Zon after she visited the parish the weekend of Aug. 24-25. Father Jim Fennessy, pastor, has said that some of the other donated items may remain in the parish garage for the time being, while others have been given to the Seneca County House of Concern and to a local organization that supports veterans, Bender said.

The donors Bender has talked with have all been very understanding of the situation and are just happy that their donated items will be put to good use, regardless of whether that happens in Nicaragua or here in the United States, she said.

“We’re praying that by next spring this will all change,” Bender added. “Hopefully this will stop, and next year it will be as it always has been.”