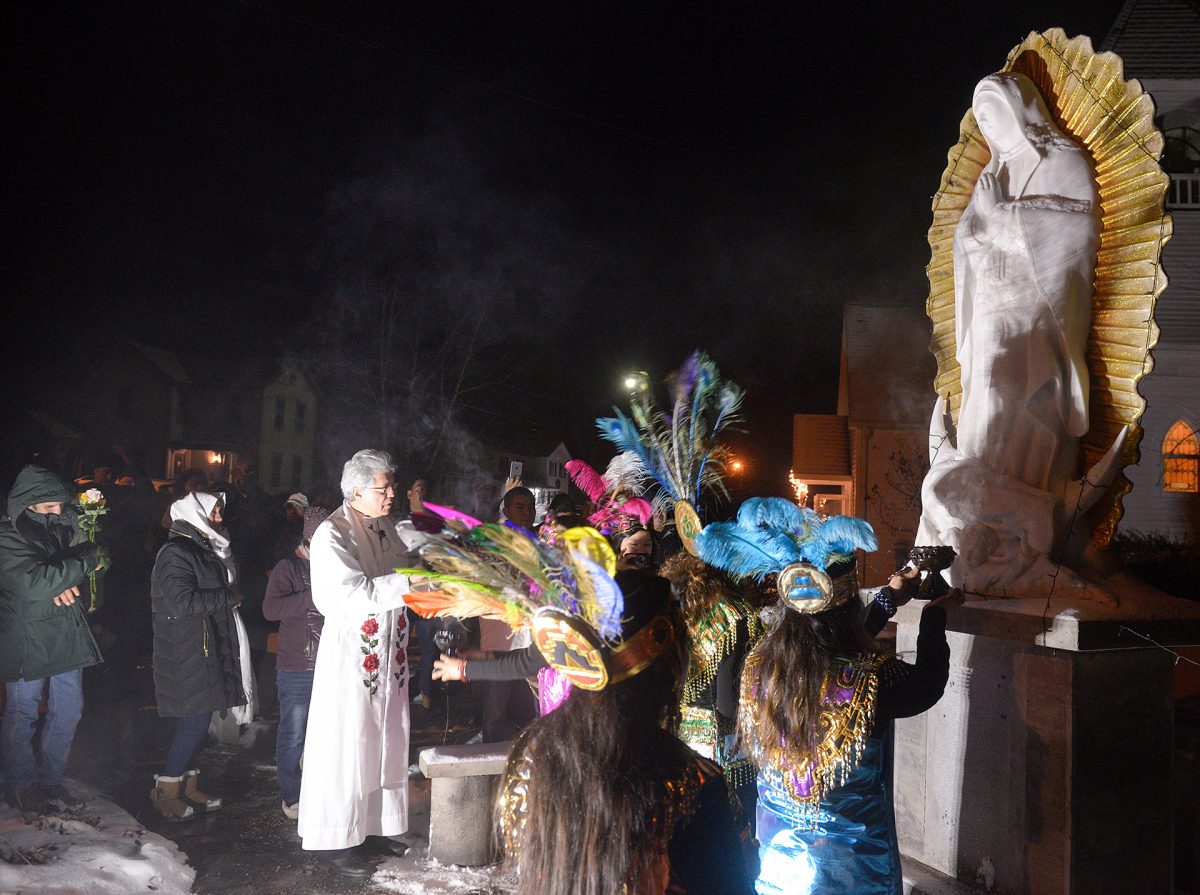 This year the annual celebration of Our Lady of Guadalupe’s feast day was extra special for members of a Wayne County mission community.

“Father Jesus (Flores) blessed the statue, and we had a wonderful celebration. It was early in the morning, of course, but it was packed,” remarked Bernard Grizard, director of the Diocese of Rochester’s Department of Pastoral Services.

Most of the people who worship regularly at the Marion mission — the former St. Gregory Church building — are migrant workers, and many of these workers have come from Mexico to work in the area’s farms and restaurants, Grizard said. The mission community is very excited about the new statue honoring Our Lady of Guadalupe, who is the patroness of Mexico, he added.

“The devotion to Mary is very important for the migrant community, and especially for many of them who come from Mexico. For them, it’s also a symbol of their cultural traditions,” Grizard said.

The new statue replaces another Marian statue that previously had stood on the grounds of the mission, which is overseen by the Department of Pastoral Services’ Migrant Ministry.

“It was a statue which was more of an Anglo or European traditional statue of Mary,” Grizard said. “Many times we talked on staff about how there is a great devotion to Our Lady of Guadalupe. We said it would be wonderful if we could purchase and have a statue … which is more representative of the devotions of the Mexican migrant community.”

The total cost for the purchase and installation of the statue — including site work and the addition of a spotlight to shine on Mary at night — came to approximately $8,000, Grizard said, noting that these expenses were paid through Migrant Ministry’s fundraising efforts.

The statue was delivered shortly before the Dec. 12 feast day. The celebration started that day with a 5:30 a.m. service inside the mission church, where migrants were joined by some permanent Wayne County residents as they sang and prayed the rosary. Before the migrants headed off to work in the area’s farms and restaurants, they also prayed together outside at the new statue and presented Our Lady of Guadalupe with roses.

“There was dance and there were different rituals. It was quite an expression of a deep faith and deep traditions within the migrant community,” Grizard said.

The new statue enhanced the feast day celebration but also has great significance for both the migrant community as well as the Diocese of Rochester as a whole, he added.

“I think it reinforces and strengthens the identity of the community,” he said. “I think it’s beautiful and a sign of hope for our local church. There is a vibrant faith community in our midst, and they are living and expressing their devotion to Mary.”

The presence of the Marion mission community provides a strong statement about how the Diocese of Rochester welcomes and embraces migrants as well as those from other cultures, Grizard added.

“In some ways it’s really an expression of the richness of our faith community here in the diocese, which is strengthened by the gifts of the migrants in our midst,” he remarked.