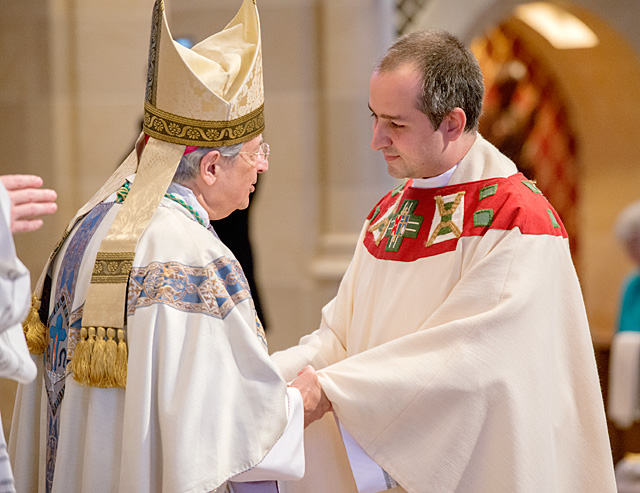 ROCHESTER — Back on June 20, the focus at Sacred Heart Cathedral leaned heavily toward fathers. It was the day before Father’s Day, and three men acquired the title of Father by being ordained to the diocesan priesthood.

Jumping ahead two months — for a priestly ordination that hadn’t originally been scheduled — mothers emerged as the dominant theme.

The latter ordination fell on Aug. 15 — the Solemnity of the Assumption of the Blessed Virgin Mary, the feast day for the greatest mother of all. That morning, Father Daniel Ruiz was ordained by Bishop Salvatore R. Matano at the cathedral.

It was Father Ruiz’s own mother who factored into the ordination Mass taking place when it did. He was originally set to be ordained June 20 along with Fathers Carlos Sanchez, Michael Fowler and Matthew Jones. However, Father Ruiz was called home to his native Colombia just days before the ordination because his mom, Luz Sierra, was seriously ill with bacterial pneumonia and not expected to survive.

Since then his mother’s health has improved dramatically — she is expected to make a full recovery, in fact — Father Ruiz, 34, was able to return to the United States for his ordination on a joyful note.

"A lot of people were praying, and God was listening," Father Ruiz told the Catholic Courier following the ordination Mass.

Father Ruiz’s father, Joaquin Ruiz; brother, Simon; and two aunts were on hand Aug. 15, having traveled to Rochester from the Colombian city of Medellin. Although Luz Sierra was not well enough to leave Colombia, the ordination Mass was streamed by satellite so she could watch back home. Father Ruiz noted that the diocesan Department of Information Technology made this transmittal possible.

Bishop Matano singled out Father Ruiz’s mother during his opening remarks, saying, "We pray that the joy of this day will truly add to her recuperation." He went on to pay extensive homage to the Blessed Mother during his homily, and then stated after Communion, "I could give to Mary on the feast of her solemnity no greater gift than a priest to continue the work of her son, Jesus Christ."

His closing remarks were particularly touching, with the bishop asking Father Ruiz to translate in Spanish his best wishes to family members. The bishop then asked for a moment of silence as he knelt before Father Ruiz to become the recipient of his first priestly blessing.

Finally, Father Ruiz left the altar and approached the front pew to give his family yet another blessing, this time in Spanish. The newly ordained priest remarked later that this moment served as a highlight of his ordination Mass, along with lying prostrate on the altar while the Litany of Saints was being sung.

"You can feel the living presence of the whole community," he said of the litany.

Also present at Sacred Heart on Aug. 15 were Father Ruiz’s three newly ordained classmates — Fathers Sanchez, Fowler and Jones — along with many other priests as well as deacons, seminarians and other friends.

Fathers Ruiz and Sanchez, who both attended seminary at Catholic University of America’s Theological College in Washington, D.C., are among several Colombians who have come to the Diocese of Rochester in recent years to study for the priesthood. Thanks to a special arrangement with the Archdiocese of Medellin, all these men will serve their entire priestly ministries in this diocese.

Father Ruiz will celebrate his first Mass Sunday, Aug. 16, at 11:30 a.m. at Our Lady Queen of Peace Church in Brighton. He served his pastoral year in that parish as well as St. Thomas More, also in Brighton. Then it’s on to his first priestly assignment — as parochial vicar at St. Benedict Parish in Canandaigua and East Bloomfield.

He acknowledged that the past couple of months have been a whirlwind of unexpected emotions, stress and traveling. After greeting several dozen well-wishers in the cathedral narthex following Mass, Father Ruiz was asked how he felt now that the ordination has occurred at last. After a pause, he offered a succinct reply: