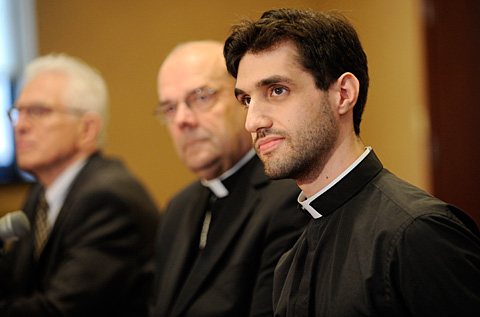 With 25 men in priestly formation and the ranks of retired priests growing every year, the Diocese of Rochester is aiming to raise $14 million to cover the educational costs of seminarians and fully fund the pensions of retirees.

At the same time, officials are rejoicing because the diocese already has raised $10.7 million toward the $14 million goal during a leadership phase of the new "Our Legacy, Our Future, Our Hope" capital campaign. Pace-setting gifts and pledges have been donated by more than 350 individuals, corporations and foundations at an average gift of about $30,000, according to the diocesan department of Stewardship and Communications.

Announcements, a video and mailings during February and March will invite parishioners from throughout the 12-county diocese to join the effort by contributing toward the remaining $3.3 million.

The Legacy campaign begins while the annual diocesan Catholic Ministries Appeal remains ongoing. Though the appeal will continue to receive donations through May 31, pastoral leaders were asked to conclude their CMA promotion by the end of January in order to accommodate the capital campaign, explained David Kelly, CMA coordinator and associate director of the diocesan Department of Stewardship and Communications.

Kelly noted that the need for this new campaign was driven by growth in the ranks both of seminary classes and priest retirees.

"When Bishop (Emeritus Matthew H.) Clark began thinking about his retirement a couple years ago, he began to think about some of the long-term issues that might be facing his replacement," Kelly said. "These (funding priest pensions and seminarians’ educations) were two issues that were identified as critical for the future of the diocese."

In 2007, the diocese had as few as four seminarians and pre-seminarians, as compared to the 25 now studying for the priesthood.

"We asked people to pray for more priests, and our prayers were answered," said Doug Mandelaro, diocesan director of Stewardship and Communications. But as a result, he pointed out, the diocese is now facing higher seminary bills. The six-year cost of educating a seminarian is about $40,000 per year, which reflects an overall trend of escalating costs in higher education.

Since the average salary for a priest is about $35,000 a year, and since most seminary candidates already have undergraduate loans, the diocese has been paying for seminarians’ training from a fund that includes proceeds from the sale of St. Bernard’s Seminary and the Becket Hall dormitory. While the fund generates income of about $200,000 annually, $600,000 was needed for seminarians’ educations in 2012-13, according the department of Stewardship and Communications.

"Financial impediments should not stand in the way of a man’s call to serve God as a priest," remarked Bishop Robert J. Cunningham, apostolic administrator of the Diocese of Rochester, during a Jan. 30 press conference to announce the Legacy campaign’s public phase.

The current group of seminarians includes several from Colombia as part of a three-year collaboration with the Diocese of Medellín. And Sergio Chávez, who completed his studies at Theological College at the Catholic University of America in Washington, D.C., was ordained as a transitional deacon last spring and continues working toward priestly ordination, according to a Feburary 2012 article in El Mensajero Católico.

Like seminary training, the cost of funding priest pensions also is on the rise. A growing number of retired priests has meant an upswing in financial commitments for the diocese at a time when market trends have left the Priests’ Pension Fund underfunded. Currently, 129 priests are receiving diocesan pensions, and in the next five years, 28 more are expected to retire, Mandelaro said. Even though senior priests typically retire at 70, he noted that most continue serving at parishes, including celebrating early morning Masses and covering when active priests are unable to serve.

The Priest Pension Trust, which had $11 million of available assets when the campaign’s leadership phase began 18 months ago, needs to have a valuation of at least $18 million to cover current obligations, the Department of Stewardship and Communications said. Diocesan officials also hope that proceeds from the Legacy campaign will enable them to provide cost-of-living increases to the $1,200 monthly benefit priests receive. To do so, the fund’s valuation would need to increase to $21 million, the department said.

Diocesan officials noted that the diocese’s $1,200 monthly stipend is well below the $1,600 national average and also lags behind neighboring dioceses.

EDITOR’S NOTE: Gifts to "Our Legacy, Our Future, Our Hope" can be made through upcoming diocesan mailings, online at www.dor.org or by calling 558-328-3228, ext. 1297. Gifts can be pledged over a three-year period. In addition to making donations by check, credit card or automatic withdrawal from a checking account, donors also have the option of giving appreciated securities, which may offer tax savings. Officials noted that proceeds from the campaign will go to the Priest Pension Trust and the Seminarian Formation Fund to be used only for those purposes and for campaign costs; no funds will be used for settlements of past, present or future legal cases.