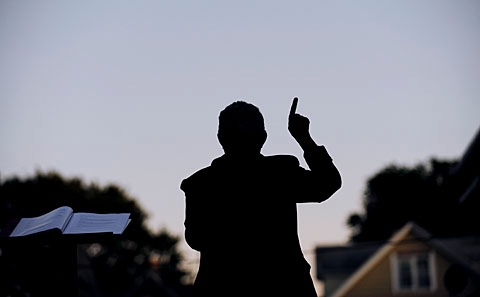 ROCHESTER — Drug addiction, domestic violence and crime could all be a thing of the past if modern families became more Christ-centric and devoted to Mary.

"Salvation has arrived today for the homes of Rochester if they open their hearts to Jesus Christ," said Sister Maria del Carmen Serrano Ayala as she ended her preaching on the second night of the annual Holy Mission held last month at Holy Apostles Church.

She and her husband, Hermano Antonio Quiñones Burgos, led the mission. They are both part of the Hermanos Cheo Brothers — a missionary order based in Puerto Rico — and began preaching in 2004.

The kind of faith she talks about was demonstrated by her own parents. When her mother went into labor prematurely, doctors told her father that the fetus would need to be aborted or her mother would risk death. Her father refused, Sister Serrano explained.

"If God is going to take her, he must take her with her mother," Serrano said her father replied. "I will not kill my daughter."

She said that not a day goes by that she is not grateful to her father and in awe of God’s grace. Her family crafted its own incubator at home and brought her home while the doctors cautioned that Serrano would likely die, she explained.

But in today’s society, that kind of family devotion is not common as it should be, Sister Serrano remarked.

"More and more, parents are failing to care for their children," she noted. "But the family unit is where they should be receiving that care and attention. … That is how we learn our values."

Such important values as respect for elders and responsibility, however, also have fallen to the wayside, she commented.

"All is not lost," Sister Serrano exclaimed. "And that hope is called Jesus Christ."

Parents — the bedrock of a family — must lead by example, she implored. They must accompany their children to church but not leave church within the four walls of a building, she added, saying that they must bring church to their homes and to their hearts.

Additionally, a husband and wife should treat each other with love and respect, Sister Serrano said.

"We have to be good role models for our children," she added. "We must teach them to be grateful … that everything they have is due to the grace of God."

Carlos Hernández, who attended the mission with his wife and infant son, said that the missionaries’ message is an important one in today’s society where so many forces work against the sanctity of the family and of marriage.

"Their preaching has been a needed spiritual injection in our community," he noted. "Jesus manifests himself and through these missionaries tells us that his word is eternal, that it doesn’t change, that it was the same yesterday, today and always. Their messages have been very realistic and filled with … doctrine and love."