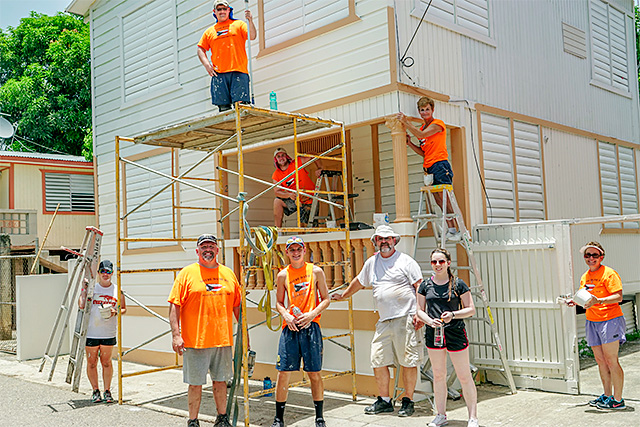 Students, staff and parents from Elmiras Notre Dame High School pose for a photo while painting a house during a mission trip to Puerto Rico.

Not unlike many peers, a group from Elmira Notre Dame High School spent a portion of the summer traveling.

Theirs was no vacation, however. They journeyed nearly 2,000 miles — not for rest and relaxation, but to perform mission service.

A 40-member contingent, two-thirds of which were students, spent July 16-23 doing work in Puerto Rico. They concentrated their efforts in Ponce, a large city on the Caribbean island’s southern coast. There, they split up into teams, making repairs on homes for residents who aren’t able to do the labor themselves. Volunteers carried out such duties as scraping, priming and repainting the modestly built houses.

"We were able to fully complete the painting of three homes, and made very good progress on the other three," said trip organizer Joanne Tunison, who noted that one of the teams spent its week at an orphanage doing chores and visiting with young residents.

This marks Notre Dame’s second summer mission effort in Ponce; the first was in 2015. Ally Wichtowski, who with her brother, Andy, is among several students to have made both trips, recalled the culture shock of her inaugural visit.

"There was just a lot of garbage on the street, run-down homes, children in tattered clothing," recalled Ally, 17. "There were stray animals and you couldn’t pet the dogs because they could carry diseases."

For Andy, meanwhile, the stifling summer weather conditions in Puerto Rico are less than ideal for performing labor.

"The heat and humidity take a toll on you. But knowing your actions positively affected someone makes it worth it," said Andy, who is Ally’s twin. Both are Notre Dame seniors and were accompanied on the most recent mission trip by their parents, Melissa and Michael.

Service teams prayed each day before beginning work, employing relevant Bible passages such as Proverbs 16:3 — "Entrust your works to the Lord, and your plans will succeed," and Philippians 4:13 — "I have the strength for everything through him who empowers me." Tunison noted that the homeowners — many of whom are elderly, disabled or jobless — often joined in the morning prayer and "at the end of the day they were so grateful, all they could do was cry."

"Seeing how appreciative the family whose house I painted was, is definitely my favorite memory," Andy said. "Also, I will always remember how close I became with my teammates."

For Andy’s sister, her top experience was stopping with her team at the orphanage on the final day of their July stay and bonding with the children there.

"Some might look at playing with those kids as a small action. However, I could see in their eyes that that afternoon had meant the world to them," Ally remarked.

Tunison said she was impressed by how the Notre Dame contingent handled its temporary lifestyle without complaint — staying in a humble dormitory-type facility; eating beans and rice every day; enduring temperatures in the 90s; learning to get along with team members; and working so hard all day long that they fell asleep quickly at night. She added that the mission group did extensive fundraising to finance the trip and also secured donations of painting supplies, clothing, playground equipment and sporting goods to bring to Puerto Rico.

Tunison, who has taught Spanish for four decades, said she began the mission-trip efforts while serving as an interim teacher at Notre Dame, seeking a way for students to apply their knowledge of the Spanish language while also acquiring a work ethic and growing in their faith — an education "not just for school, but for life." On that count, Tunison gave high marks to the young workers.

The seeds growing inside of Ally and Andy are evident, based on their assertions regarding the importance of mission duty.

"I believe that it keeps one grounded, and helps to not get caught up in the ideals of the materialistic society that we live in today," Ally said.

"It teaches you important values such as selflessness, fellowship and faith," her brother added. "In addition, it gives you the opportunity to change the lives of others. In my particular experience, we didn’t just fix and paint a house — we gave a family a new perspective and hope."