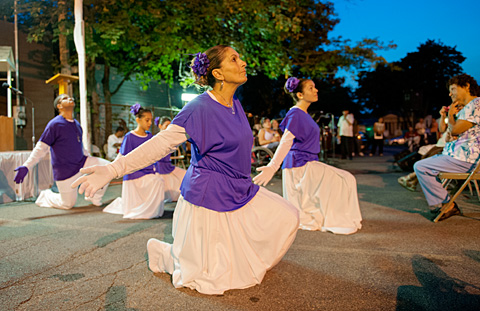 These are not the kind of words usually heard at the annual Santa Misión. But Father Enrique López Escalera used them to grab the attention of the youths in attendance Aug. 21 at Holy Apostles Church as he talked about the moral dangers of the world and the pagan culture that is prevalent in American society. And, he explained, the commandments offer them the tools to keep from falling victim to those evils.

"The only thing the devil has to offer us is hell, so don’t get mixed up with witchcraft, Ouija boards or satanism," he advised the teenagers and young adults. "Young people, be very careful. Be very careful with drugs. … That is a doorway to darkness."

Father Escalera preached to them in English, but he translated the main points in Spanish for the rest of the nearly 200 people in attendance in the Holy Apostles parking lot. The theme of this year’s weeklong mission was "Ven a la Fe. Vive el Amor." ("Come to the Faith. Long Live Love.")

The Aug. 21 presentation included a liturgical dance by young parishioners and a skit about a young man who wouldn’t listen to his mother until prayer transformed his life.

To ensure a positive future, more youths in the community need to turn to God, understand the importance and power of prayer and become involved in the church, said Julio Roche, who heads up a young-adult ministry at Holy Apostles.

"We want the church to be full of young people," he said. "And we want to foster leadership."

Such leadership requires the courage to stand up against the evils of popular culture — which include materialism and access to pornography — and follow God’s commandments, Father López Escalera explained. And that courage can only stem from a strong faith, he added.

Putting anything before God is idolatry, and many teens fall prey to that concept because they lack a firm foundation in their faith, Father López Escalera said. Teens can become obsessed easily and think they cannot live without something or someone, which has led to suicide, he noted.

"Sin makes us dumb," Father López Escalera stated. "It clouds our intellect, weakens our will. That is why we need the commandments … to lead good, upright, beautiful, holy lives."

Jerry Rivera and Yasmin Rossy, both 17, walked over to the mission upon receiving an invitation from a neighbor. Neither belongs to a church and said that Father López Escalera helped them better understand and relate to the commandments, especially the Fourth Commandment to honor one’s mother and father.

"I realize how incredibly important that it," Jerry said.

Frances Cruz, 13, who attended with her aunt, Aida Vázquez, a parishioner of Our Lady of the Americas Church, said that she realizes how cautious she must be around people who are evil.

"We always have to be careful," she said. "But God is always next to you. Even when you think he’s not there, he always is."