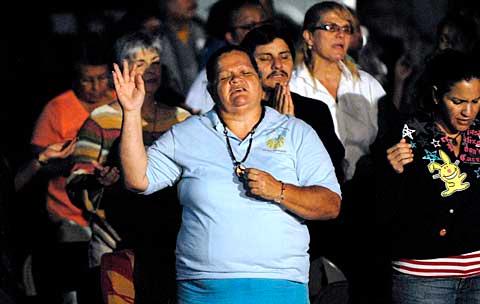 ROCHESTER — Iris Orono felt such a moment of peace and clarity during the annual Santa Misión that she fainted and was guided to the floor at Our Lady of the Americas Church, where the weeklong mission was held in August.

The message from visiting preacher Nestor Bello — in addition to his praying over people during the mission with help from members of the New York City-based Hermanos de Cristo charismatic Catholic group — reminded her of experiences from her native Puerto Rico, Orono said.

"It’s something so beautiful, it’s difficult to explain," she said of Aug. 9, when the mission was held indoors because of rain. "He prayed over me … in such a special way."

She said that she felt especially overwhelmed when the man who prayed over her, whom she had never met before, asked God for exactly what she has been seeking: improved health so she can begin evangelizing more — also a call from Bello during the mission. Orono said that she could not believe she was hearing the man say the words that were in her head.

"God is great," she exclaimed.

In addition to a closing Mass celebrated by Bishop Matthew H. Clark on Aug. 13, the mission included a visit by Bello and his team to Geneva’s of Our Lady of Peace Parish. Except for the opening night when about 60 people attended, about 180 people attended each outdoor session as well as the closing Mass, noted Brother Juan Lozada, director of the diocese’s Spanish Apostolate.

Throughout the mission, Bello spoke of Jesus as the pastor who tends to his sheep and nurtures them because he loves them and cares for them as part of the theme "He knows you and calls you by name." Bello said that he was called at the young age of 13 to spread God’s word.

"Through his wonderful mercy, he saw something in me," he said. "I felt called."

And once a person hears that call, he has no other choice but to follow it, Bello added.

"If he calls you, it’s for a reason, a mission," he noted. "It’s part of our baptismal covenant … to bring this message to everyone."