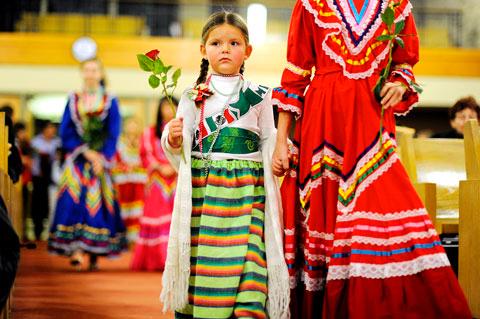 PENFIELD — A girl portraying an Aztec Indian child carried a bowl of incense that filled the entire church. She was accompanied by a boy dressed as Juan Diego and a teenager holding a large portrait of Our Lady of Guadalupe.

The procession, which included two members of the Hoppe family who organized the Dec. 12 bilingual Mass as well as several dancers from Arco Iris Mexicano, was part of the annual celebration in honor of the Guadalupe feast day at St. Joseph Church.

Adriana Hoppe said that the celebration started out small seven years ago with just a prayer service. A couple of years ago, the children acted out the story of Guadalupe during the Mass. Mary appeared to Juan Diego, an Aztec Indian, on Tepayac Hill on the outskirts of Mexico City in 1531.

It is important to note that Mary appears to those who are humble, Brother Juan Lozada, director of the diocese’s Spanish Apostolate, said during the homily at the St. Joseph Mass.

The Mass, attended by about 80 people, also included a prayer for the end of violence and the traditional procession of children and adults carrying roses that were placed on the altar step in front of the Guadalupe portrait.

Donna Pilznienski of Penfield said that the Guadalupe story shows that Mary is there for those who need her.

"It was quite the miracle that happened at a time when they (Aztec Indians) really needed it," she said. "We all need a mother no matter how old we are."