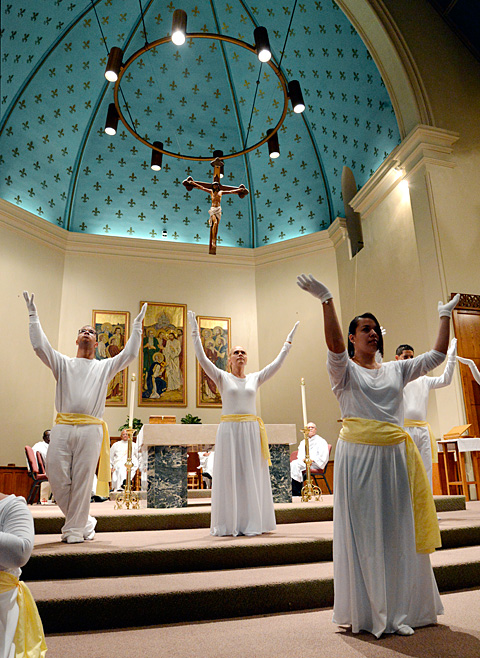 ROCHESTER — Our modern secular age cries out for a new St. John the Baptist.

Or at the very least, more Catholics need to stand up and cry out "like a voice in the desert", and fill that important role of preaching salvation through Jesus and the waters of baptism, said Father Mickey McGrath during the homily for the saint’s feast day Mass held June 24 at Holy Apostles Church.

The feast day of St. John the Baptist is unique in that it is celebrated on the day of his birth, which highlights his important role in the history of salvation, said Father McGrath, who also was celebrating the 13th anniversary of his ordination.

During the Mass, Father McGrath and Father Tony Mugavero, pastor of Holy Apostles, sprinkled the water of baptism on the more than 100 people who attended the celebration.

The lectern also was adorned with the flag of Puerto Rico, as St. John the Baptist is the patron saint of the Caribbean island.

In recent conversations with staff members who are Puerto Rican, Father McGrath said that he asked about the custom of going to the beach on the feast day and running into the water three times. He thought it symbolized baptism, but they explained it was to bring good luck, he said.

"We are living in the first culture that is atheist more or less," he remarked.

Our modern times have become more godless than the days of the pagans of ancient times who worshipped false gods, explained Father McGrath. The pagans at least had a belief system, he said.

"When we have God, we don’t need superstitions", he said. "God is all around us but we seek new paths to him. While many talk to us about God, many cannot hear his voice."

There are Catholics, in fact, who have turned away from God and don’t know his word, added Father McGrath.

God’s message was clear: Turn away from sin and change your lives for the better, said Father McGrath.

"We, too, ought to announce this same message today," he added.

Dressed all in white, the young liturgical dancers who performed after Communion did offer that message of hope that St. John the Baptist preached, said Deacon Salvador Otero.

"These children are a blessing," he added. "They show us that there are young people that are willing to do this for the Lord. It’s something beautiful."

Joselyn Vázquez, who danced front and center of the altar steps with the eight other dancers from St. Frances Xavier Cabrini Parish, said that she began learning to be a liturgical dancer at age 8.

When the 12-year-old seventh-grader learned that the group would perform for the feast day, she was "excited and shocked."