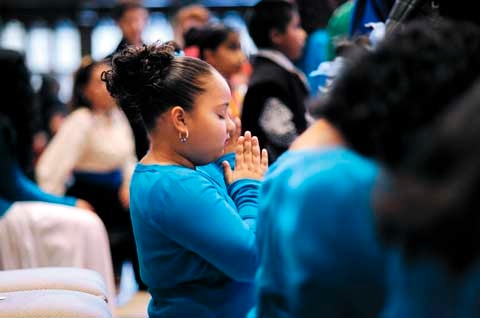 More than 500 Latino parishioners from churches throughout the 12-county diocese came out to mark the more than 50 years of Hispanic ministry in the diocese. Masses said in Spanish first began in the 1950s and 1960s and have grown in number as the Hispanic population has grown, diocesan officials said.

Several city parishes were represented at the Mass as well as churches in Geneva, Newark, Avon, Brockport and King Ferry. The native countries of these parishioners were on display as liturgical dancers carried posters of Latin American flags during the opening procession. Following Communion, the young girls and boys also performed a liturgical dance to the song, "Supe que me Amabas" ("I Knew You Loved Me").

Sister Luci Romero, a migrant minister from Wayne County, said she accompanied about 40 adults and children — mainly Mexicans who now live in Wayne County — to the special Mass, and most of them were visiting the cathedral for the first time as well. For the members of the diocese’s Latino community to be together and celebrating in their own language using their music and symbols was very moving, she said.

"It’s a unifying experience, an experience of identity," she said. "It was beautiful and joyful."

For Erika Cruz of Marion and her family from Hidalgo, Mexico, the Mass also provided a chance to see the cathedral for the first time. She also was gratified to see how the Mass brought together the Latino community from all areas.

"We are separated, but here we are united," she said.

The Mass, which was more than a year in the planning, was concelebrated by six priests who serve the Latino community. Brother Juan Lozada, director of the diocese’s Spanish Apostolate, two deacons and two seminarians from Colombia also participated.

The Oct. 17 Mass was a moment of joy to have so many of the diocese’s faith communities together at the cathedral, Bishop Clark said.

"It’s a call to open our hearts to God’s word spoken to us at this liturgy," he noted.

The liturgy’s readings about Moses and the widow also demonstrated the importance of fidelity and perseverance, the bishop said.

"Justice is living up to our relationships (as we) honor God and honor our neighbor," he commented.

At the gala that followed at The Diplomat Banquet Center in Gates, Father Laurence Tracy, who has worked with the Latino community for four decades, said that the celebration also marked an opportunity for the community to contemplate the future of Hispanic ministry. He recommended developing culturally based programs to keep youths interested in church-related activities; creating neighborhood cooperatives with local stores to help people who are struggling financially; celebrating the diversity of local Hispanic parishioners; and making Hispanics’ voices heard about the need to maintain an active church presence in the city.

"Hispanic Catholics need to wake up and recognize the need for them to take more responsibility for ministering to Hispanics," he said.

Enrique "Kike" Ruiz said that the Mass did bring back memories of those neighbors who served as pioneers and worked to establish Masses for the Spanish-speaking communities.

"We remember our families who first arrived here," said Ruiz, a parishioner of Our Lady of the Americas. "We (as a community) must continue celebrating."