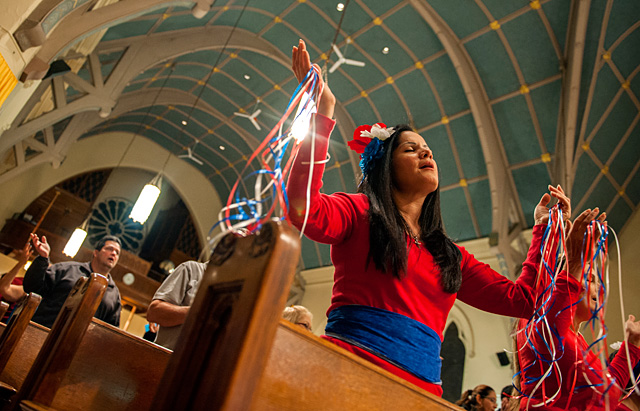 ROCHESTER — The annual Mass in honor of Our Lady of Providencia also served as a symbol of unity for the liturgical dancers from the city’s parishes.

Ivelis Medina, the coordinator for the group from Holy Apostles Church where the Nov. 19 Mass was held, said that she was proud of the beautiful performance of the youths and young adults. The other dance group is based at St. Frances Xavier Cabrini Parish.

"This is the first time that we are together and we’re going to continue (performing) together," she added.

The Puerto Rico native said that she views the dances as a form of prayer. As part of that reverence, the dancers carried up flowers to the image of Providencia that stood by the altar alongside the flag of Puerto Rico. The dancers wore the red, white and blue of the flag — with the girls donning long, white, flowing skirts with red tops and blue sashes as well as flowers in their hair. More than 200 people attended the Mass.

"We also try to relay a message to the congregation through the dance," Medina noted. "And if we receive blessings in the process, all the better … but it’s another way to revere (Mary)."

That devotion to Mary, Our Lady of Providencia, has a long history on the island, explained Deacon Bienvenido "Benny" DeJesus during his homily. He said that Gil Esteve brought it to the island from Spain when he was named Bishop of Puerto Rico in the early 1500s.

When he arrived, the cathedral was in ruins, said Deacon DeJesus, as was the diocese. But the bishop prayed to Our Lady of Providencia and the cathedral and the diocese were rejuvenated, he added.

Centuries later, the Providencia feast day was moved from Jan. 2 to Nov. 19 to coincide with the date that the island was discovered, he added. As part of that 1969 decree from Pope Paul VI, Our Lady of Providencia was named the patroness of Puerto Rico, said Deacon DeJesus.

But no matter her title, Mary serves as an example of faith to all Christians as she accepted God’s call to bear the savior of the world, he said.

"She never thought to say no, she accepted her fate as the mother of God," he said. "Even though she knew that she would suffer greatly. … She was in every moment the key to salvation for every single one of us."