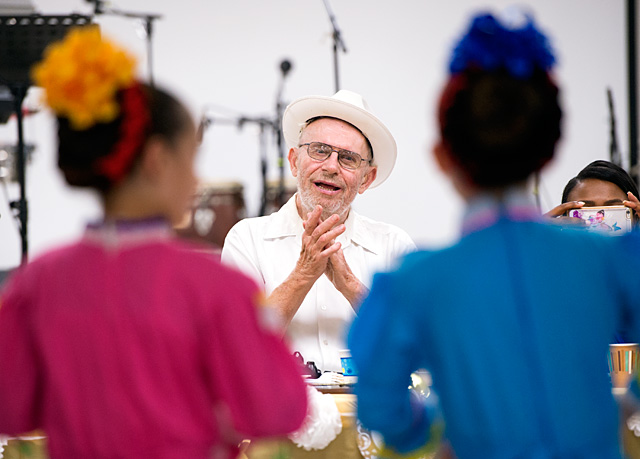 ROCHESTER — More than 60 percent of Catholics in the United States 18 and younger are Hispanic.

Auxiliary Bishop Nelson Peréz from the Diocese of Rockville Centre noted the statistic during his homily for an Oct. 7 Mass at Our Lady of the Americas Church. The Mass celebrated Hispanic Heritage Month and kicked off the Diocese of Rochester’s third-annual Hispanic Ministry Leadership Conference, which took place the next day.

Parishioners recognized for their service

"The Hispanic presence is transforming the church in this country," Obispo Peréz said. "We are a people of great faith."

Pope Francis acknowledged the gifts of immigrants, and notably Latinos, when he addressed them in Spanish during a stop in Philadelphia last fall as part of his visit to the United States, Bishop Peréz noted. During that address, the pope urged immigrants to never be ashamed of their culture and traditions — a sentiment Bishop Peréz highlighted during his Oct. 7 homily.

Bishop Peréz said the pope’s words still resonate and were appropriate for a celebration of Hispanic Heritage Month, during which the country and church recognizes the many contributions of Latinos. At the start of his homily, he shouted out different Latin American countries to get a feel for the cultural backgrounds of the more than 200 parishioners who attended the Mass.

Rufino Pabon kneels in prayer during Hispanic Heritage Month Mass Oct. 7 at Rochester’s Our Lady of the Americas Church.

Born of Cuban immigrants who emigrated to Miami, Bishop Peréz grew up in northern New Jersey. He was ordained in 1989 and had been a Catholic-school teacher in Puerto Rico before entering the seminary. He was named an auxiliary bishop in Rockville Centre in 2012 and also serves as president of the U.S bishops’ subcommittee on Hispanic affairs.

During his Oct. 7 homily, he noted how far Hispanics have come in the church. His family’s U.S. faith journey began with a Spanish Mass celebrated in the basement of their local parish that made its way to the gym and finally to the church as the community grew, he said.

When he was young, the Mass schedule at his home parish included only one Spanish Mass and five other Masses celebrated in English. Now, that schedule is reversed, he noted.

"This reality is taking place throughout the country," Bishop Peréz said.

Hispanics need to stay united no matter where they come from and support new immigrants, which hasn’t always been the case, he noted. Hispanic families also must instill those values of faith, cultural pride, language and solidarity.

"The Holy Father calls on us to never be ashamed of our traditions and our values," added Bishop Peréz.

Those values are rooted in the deep faith that dwells in Hispanics, even those who leave the Catholic Church, he said.

"That faith is something … that just lives inside of us," he said.

Hispanics also have a great fondness for their priests, evident in the love he saw for Father Laurence Tracy, Bishop Peréz noted. Following the Mass was a celebration for Father Tracy’s 50th anniversary of his ordination to the priesthood.

"He is a priest who has walked with you in good (times) and in bad and feels your love always," Bishop Peréz added.

Father Tracy also was honored with the keys to the city from Rochester Mayor Lovely Warren during the reception that followed the Mass.

"There is no one that I know that is giving so selflessly," she said during her presentation. "Father Tracy has been there for many people in our community and asks for nothing in return, and that is because he truly believes God put him here to serve the community."

Father Tracy said he was honored by the recognition and noted how his ordination took place at a critical time in the nation’s history in terms of economic, racial and social-justice equity issues that still haven’t taken effect.

"So, we can’t dwell on the success in the past of mine or others," he said. "We have to stay on the task at hand … to build the kingdom of God."

Part of the work for the future is forming leaders among laypeople as Pope Francis urges Catholics to get out of the pews, Father Tracy added.

The continued formation of leaders in the Latino community took place Oct 8, with participation by Bishop Peréz. The daylong conference also provided facilitator training for parish encuentros that will begin in January, explained Lynette Saenz, diocesan director of the Office of Cultural Diversity. Ideas generated by Latino parishioners from these local encuentros will be incorporated into the fifth national encuentro planned for 2018 in Grapevine, Texas.

Over the last 40 years, the church has used the process of encuentro — a gathering for spiritual discernment and reflection — to develop Hispanic ministry, according to information at http://vencuentro.org.

The parish-level encuentros in 2017 will focus on five themes: called to a loving encounter with Jesus; with words and actions: do it; walking along with Jesus, bearing fruits of new life; and celebrating the joy of being missionary disciples.

The Oct. 8 leadership conference also covered the history of the national encuentros, the theological tenets of the 2018 encuentro and the missionary elements required to engage parish communities in the process.

Mario Escalante, a St. Frances Xavier Cabrini parishioner and member of Roc/ACTS, has participated in past encuentros. He hopes the next one will provide a plan for the church to address the roots of many societal challenges, including equitable education, health care and employment opportunities.

"We need to use our faith to build a new community, a stronger community with more values and more respect for all people no matter their culture or language," said Escalante.