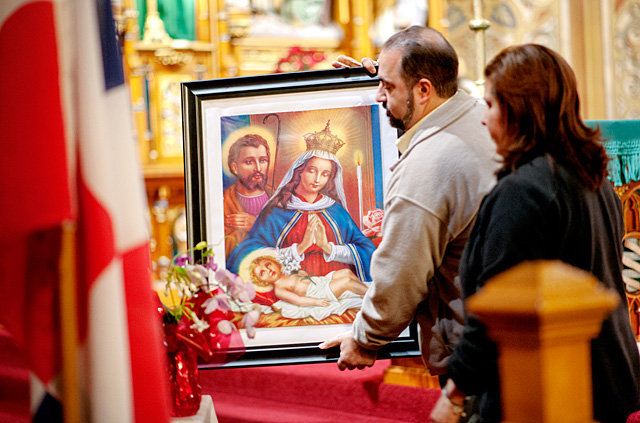 ROCHESTER — Father Laurence Tracy reminded those gathered for the annual Mass in honor of Our Lady of Altagracia, protectoress of the Dominican Republic, that the Mary honored that day is mother and protectoress of all.

During the Mass, a large group of children, from toddlers to teenagers, carried red roses that were placed in vases set on a table in front of the large portrait of the Altagracia image carried in by parishioners during the procession.

"We are one family. We are one people," said Father Tracy noted during the homily. "We are one church."

So no matter the title under which Latinos honor Mary — from Our Lady of Providencia in Puerto Rico to Our Lady of Guadalupe in Mexico — Father Tracy said that Latinos should look out for the least of their brothers when they are threatened with deportation by unjust U.S. immigration policies.

"Like a mother, we pray for our children who suffer," he remarked. "Who among us is not an immigrant? The Latino community is united not only by believing in one God and our mother Mary but also in suffering."

Even Pope Francis, for World Day of Migrants and Refugees on Jan. 18, pointed out that we must be like the Virgin Mary and serve as protectors of our Latin American brethren and become a united community, explained Father Tracy.

"We should become … one church without borders," he added. "There are no borders here between Dominicans and Puerto Ricans … or Mexicans."

The parishioners in the Latino community in Rochester are one family, concurred Miriam Rosa, who is from Puerto Rico and always attends the Altagracia Mass. She attends Mass at Our Lady of the Americas Church.

"Our devotion … has become a gesture of our love for each other," she said. "And here in Rochester, (Mary) is a bridge to unification."

That devotion is a tradition that children learn at a young age, said Anastacio García, who first moved from Santo Domingo to the United States in 1991 to play in the major and minor baseball leagues, including stints with the Toronto Blue Jays and the Rochester Red Wings.

"That image is the most sacred thing (in our community) apart from our own mothers," he said. "It is a tradition of respecting our patroness, our queen. We believe greatly in her and ask for her blessings."