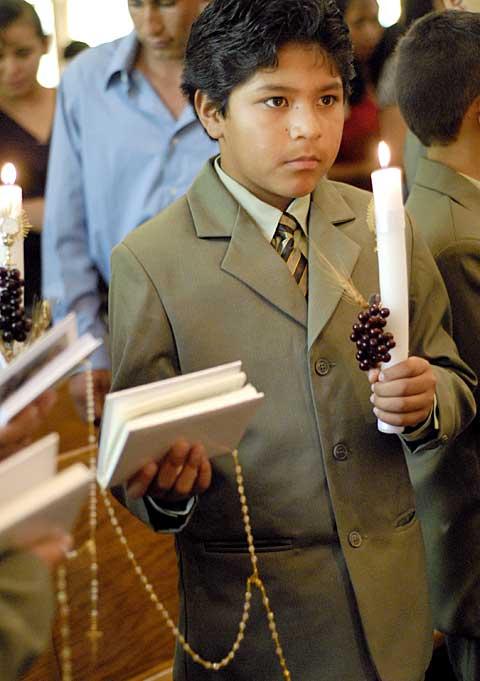 MARION — The community at the former St. Gregory Parish practices cross-cultural respect and worship every Sunday.

The church, now known as Our Lady of Guadalupe Mission at St. Gregory’s, reopened last fall after shutting its doors two years ago. When Father Jesús Flores heard that the church was vacant, he said that he approached diocesan officials about its availability for the migrant community. He then got the ball rolling on using the building as a place of worship for the largely Mexican migrant community in the area.

His service as diocesan coordinator of migrant ministry has come full circle through this new church, Father Flores explained after a June 20 Mass at the church. It was in Marion a decade ago that he first began to dream of a church just for the migrants. That dream became a reality when Bishop Matthew H. Clark celebrated the first Mass at St. Gregory after it reopened, Father Flores noted.

"It was a good idea after all," he said of the migrant community having its own church.

Rosario Jaramillo, who has lived in the area for more than 12 years, said that the community is so grateful to have a church to call its own. She served as catechist for the children in Our Lady of Guadalupe’s inaugural first Communion class. The 15 children, including her son, Nolberto, made their first Communion on June 20, and the tiny church was packed to the brim with close to 300 people.

Jaramillo said that she also is happy and grateful to the small group of former St. Gregory parishioners who returned when the church reopened. They have provided support in many ways, noted Father Flores, because they know the building so well and make themselves available for any questions or issues that come up. Many of those parishioners were volunteers who undertook a restoration of the church from the rafters to the basement in recent years, said Pat Bovard, a former St. Gregory parishioner.

"It’s a new life (for the church)," Howard Bartlett, also a former St. Gregory parishioner. "God has a plan."

The group of former St. Gregory parishioners attends Mass every Sunday even though they don’t speak Spanish. In honor of the first Communion families, those parishioners organized a celebration following the June 20 Mass and provided cake and punch for the families. The cross-cultural experiences even extended to the June 20 Mass itself as Father Flores spoke to the children in Spanish and English during his homily.

"It feels like home," former St. Gregory parishioner Marilyn LeClare said of attending Our Lady of Guadalupe Mission. "We were worried that the people would feel like we were intruding."

"They welcomed us with open arms," Bovard added. "Their hospitality is amazing."

Sister Luci Romero, migrant minister for Wayne County, said that the group of former parishioners has shown how much it cares about the migrant community through its constant presence.

Ted LeClare said that the parishioners struggled spiritually when St. Gregory closed but now can appreciate what God held in store for them.

"You look at the church and all the work we did, to see it close was heartbreaking," he said. "We’re glad to see it full again."