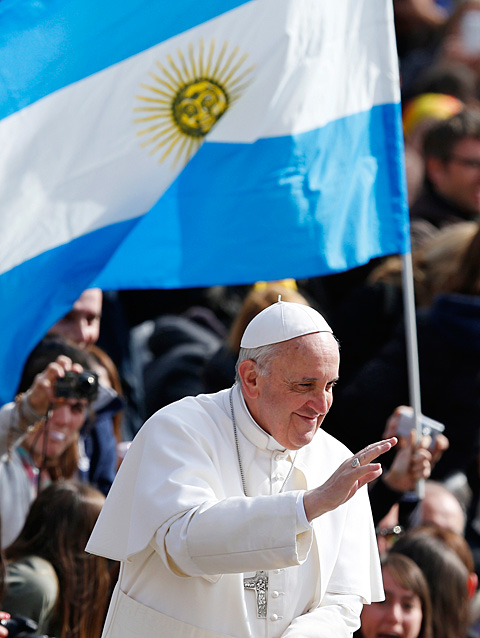 Latinos throughout Rochester feel not only a sense of pride but a renewed sense of hope for the future of the Catholic Church under the leadership of newly elected Pope Francis.

Elizabeth Johnston said that she was with her son when she saw the news about the new pope last month on a television at a local doughnut shop. She asked a waitress to turn up the volume so she could hear Pope Francis speak.

"When he walked out, I told my son that he was from Argentina and immediately he asked, ‘Mamí does that mean that he’s Hispanic just like us?’" added Johnston, assistant director of faith formation, youth ministry and CYO for St. Pius Tenth Church in Chili. "The possibilities and the hope that he brings can be as astounding as Vatican II."

Lynette Saenz, director of cultural diversity for the diocese’s Parish & Clergy Services, said that Pope Francis did seem to connect with people right away.

That connection became very personal for her when Saenz read that aides had handed him a cup of "Mate" tea during an event. That kind of tea is common in Pope Francis’ native Argentina, said Saenz, who has bags of it in her home.

"That just made him human," she added. "And this is what we’re talking about (in Hispanic ministry): How important it is to have people in leadership positions of the church who reflect the people."

The convergence of the pope’s election and the recent release of the diocesan Hispanic Ministry Plan also struck Saenz, she said. The plan was a response to the growth of the Latino community throughout the diocese’s 12 counties, which parallels growth nationally, she said.

Because Pope Francis represents a first for all of the Americas, his election also is a moment of shared pride, Saenz noted.

"We are one," she said. "There is a sense of pride for all Americans and not just the Hispanic community. … This is all of us."

"We are delighted," concurred Miriam Santana Valadez, a native of Mexico whose family members are parishioners of Our Lady of Lourdes Parish in Brighton. "Pope Francis knows deeply the spirituality, culture and therefore the needs of the Latino population in America. His name is already a statement of his commitment to service especially to the poor and the needy. … We also hope that this selection will help reinvigorate the church in Latin America and in the world."

For Sister Luci Romero, the pope’s actions to break with protocol so early in his pontificate signal a new direction for the church, she said. For example, on Holy Thursday he washed the feet of 12 people of different faiths and nationalities, including women, who are being held at a juvenile detention facility, according to www.catholiccourier.com/news/world-nation/pope-washes-feet-of-12-young-detainees-to-serve-them-from-the-heart.

"I am filled with hope," said Sister Romero, a migrant minister serving Wayne County. "We need a person like him, who shares his faith with the most vulnerable in society. Our community is happy with him (and) we feel close to him. I feel that in general we feel more protected by the church."

Pope Francis’ work and knowledge also highlight the gifts that Latin Americans throughout the world offer to the church, said Deacon José Berrios of Rochester’s St. Frances Xavier Cabrini Parish. And the pope offers a model of faith for all to follow through his continued humility as a Jesuit living out his life caring for the poor, the less fortunate and the marginalized of our modern era, he noted.

"This is our opportunity to live out the ‘the real church’ from the perspective of the marginalized in our communities," Deacon Berrios said.