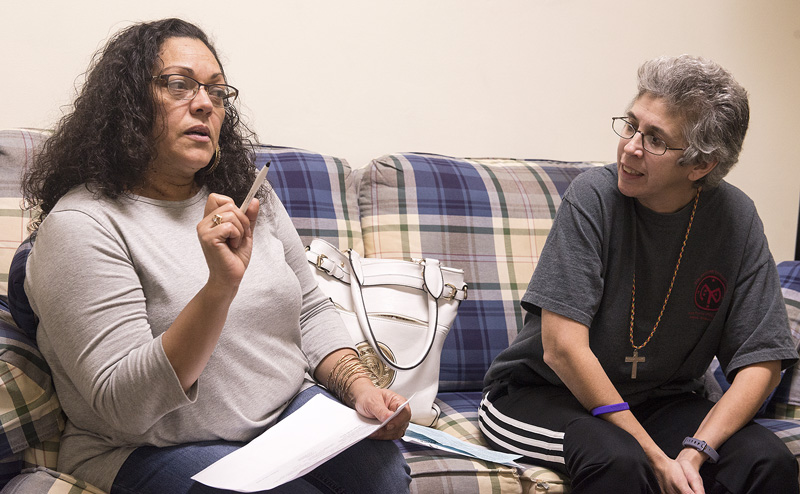 Wanda Medina, Katherine Quinones and Elizabeth Johnston (not pictured) meet at St. Michael's in Rochester as they begin their pilgrim into the Cursillo movement on Dec. 11. Courier Photo by John Haeger

“It was a huge movement,” said Johnston, faith-formation coordinator at St. Frances Xavier Cabrini Parish in Rochester. “My grandmother was a cursillista, and my uncles were.”

A cursillista is a person who has made a Cursillo weekend, which is a person’s point of entry into the movement. The weekend includes presentations, discussion and meditation led by lay leaders and ordained spiritual advisers. The word Cursillo is Spanish for “short course in Christian living” focused on piety, study and action, Johnston said.

Cursillistas meet weekly in small groups after the Cursillo weekend and in larger gatherings known as Ultreyas — located at several parishes around the Diocese of Rochester — that convene monthly.

Many local Latinos are familiar with Cursillo or made weekends in their native countries, Johnston said. The movement originated in Spain in the 1940s and went on to become international, said Sister of Mercy Theresa Rutty, who is bulletin editor for St. Frances Xavier Cabrini. Cursillo arrived in the United States in the late 1950s, she said. The movement officially began in the Diocese of Rochester in 1967, and a 50th-anniversary Mass for the movement was held in October.

When the charismatic movement was introduced in the Latino faith community years later, the Cursillo movement faded into the background until recent years, Johnston said.

“There’s a cyclical nature to the Cursillo community,” Msgr. Krieg remarked. “The primary thing is to bring about an awareness of a personal relationship with the Lord. And out of that relationship to make community happen.”

“People have been waiting for a long time” for the movement to be renewed among local Hispanics, she said.

In 2011, Father William “Mickey” McGrath, copastor of St. Frances Xavier Cabrini, also had the idea of renewing the Cursillo movement among local Hispanics. Since that time, Sister Rutty has been working with him in the endeavor. She is bilingual — having lived in Chile for 15 years — and has been involved in English Cursillo since 1975. Father McGrath also is one of two spiritual advisers on the English community’s Secretariat, which is a small group of clergy and laity that directs, promotes and develops the local Cursillo movement in conjunction with the School of Leaders. The school is an outreach to cursillistas and is one of community and formation, according to rochestercursillo.com.

Early in 2016, Sister Rutty attended a Cursillo workshop and learned how to present a weekend.

“It isn’t to get speakers together, find a place and let’s do it,” she added. “We need to do a lot of groundwork.”

Creating a School of Leaders to get Spanish speakers interested in Cursillo is one step, as well as getting more participation from parishioners who have made Cursillo weekends, she said.

A separate Secretariat for the Spanish-speaking community also is needed due to cultural differences, said Father McGrath.

Until the formal structure of a Spanish-speaking Cursillo component is established, bilingual parishioners are encouraged to attend Cursillo weekends that are conducted in English, Sister Rutty said.

Additionally, Spanish-speaking parishioners from St. Frances Xavier Cabrini Parish who have made their Cursillo weekends have been holding monthly Ultreyas at St. Michael Church this past year, said Sister Rutty, noting that they study material from the movement’s national office in Texas.

“We would like to see everybody who has ever done (a weekend) to do it,” Sister Rutty said about inviting more people to participate in the Cursillo movement.