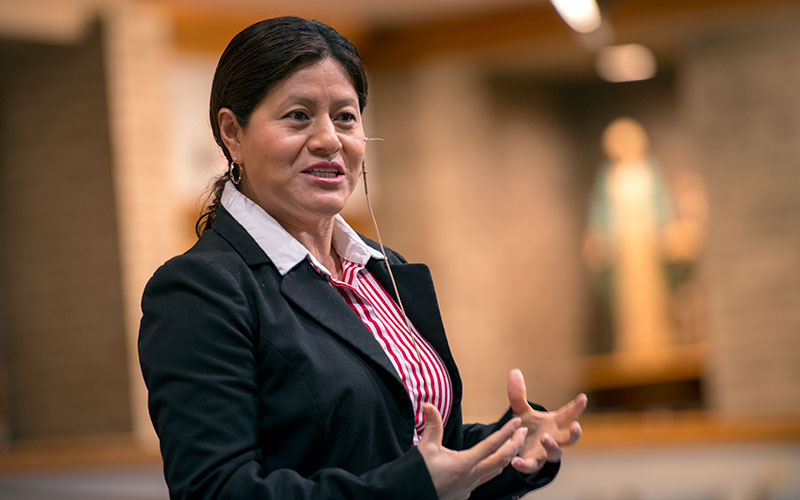 GATES — Lent offers an opportunity to reflect on the scriptural call affirmed by Pope Francis to “welcome the stranger.”

Such reflections are part of a Lenten retreat organized by the parishes of Gates Chili Catholic Community, which comprises Parish of the Holy Family and St. Theodore Church in Gates and St. Pius Tenth Church in Chili, said Sister of Mercy Catherine Pfleger, a member of the retreat planning committee.

“We are looking at Catholic social teaching and what Pope Francis has to say in ‘Laudato Si,’ ” his second encyclical on care of the earth, added Sister Pfleger, a pastoral associate at St. Theodore.

The pope’s message is “care of people whether they be immigrants or not and care of the earth,” she added. “And care of the immigrants seems to be first and foremost these days. … But what do we know about farmworkers (here) and their struggles?”

During the Feb. 22 retreat session at Parish of the Holy Family’s St. Helen Church, Librada Paz spoke of the struggles she faced as a farmworker in the United States after she crossed the border into this country from Mexico at age 15.

One of 11 children in her family, Paz said she cried many tears and felt anger at her own parents for giving her little choice but to leave home to find a better life.

“I knew I wanted to be a successful woman,” she said, explaining her decision to come to the U.S.

God was with her during many of the challenges she faced once she crossed the border, including attempted sexual abuse at the hands of other workers or supervisors during the years she worked on farms in Ohio, Florida, North Carolina and South Carolina before settling in the Brockport area with the help of one of her brothers.

“So many nights, I wanted to give up and go home,” she said.

But Paz went on to earn an engineering degree from Rochester Institute of Technology and has been fighting for the labor rights of farmworkers for many years, she told the more than 50 people who had gathered for her talk. New York state is one of the biggest agriculture producers in the country, she explained, but farmworkers in this state do not have the same rights as other workers, including a day of rest and a right to overtime or disability pay.

The lack of rights, along with the grueling physical toll of the work, is why vulnerable migrant populations fill the positions without complaint no matter the conditions, Paz explained.

Ruth Fogerty, who attended the retreat with her friend, Sister of Mercy Kate Kanick from St. Theodore Church, said she felt moved and motivated by Paz’s story, especially her advice to visit a farm and have a meal with the farmworkers.

“That (step) more than anything would change perspectives, hearts and involvement,” she said of such interaction with farmworkers.

Hearing her story during Lent reminds one of the need to walk in another’s shoes, said Rose Arena, a parishioner of St. Jude the Apostle Church in Gates.

“We should treat each other with compassion and respect … whether immigrants or we were born (in the U.S.) and live here,” she said.

While more people may be cognizant of immigrant stories like Paz’s, they may be less familiar with what is currently happening to refugees worldwide, said Jim Morris, associate vice president for family services at Rochester’s Catholic Family Center. Morris was to give a March 1 presentation on the plight of refugees as part of Gates Catholic Community’s Lenten retreat.

During a Feb. 15 interview with El Mensajero Católico, Morris said that during his presentation he would walk participants through the global refugee situation.

“There are lots of misconceptions about how refugees get into the country,” he said.

Morris noted that refugees allowed into the U.S. mostly come from camps operated by the United Nations Refugee Agency and undergo a screening process that can take two to four years to be vetted and prepared for resettlement.

“We definitely know who these folks are,” he said.

According to information from the United States Commissioner for Refugees, about 22.5 million refugees have fled their countries, Morris said. The United Nations negotiates with refugees’ native countries to return the majority of them home safely, he added. Another large number obtain permanent residency in their countries of asylum, Morris said, and only about 200,000 are resettled in other countries.

Prior to the Trump administration’s proposed ban on refugees from majority Muslim countries — Chad, Iran, Somalia, Syria, Libya and Yemen — the United States led the world in the number of refugees accepted for resettlement, at about 100,000 annually, Morris noted.

The travel ban, which is still being argued in federal courts, shut down the refugee mission process for four months, Morris added, noting that the additional layers of security protocol that have been imposed has held up any refugees who were in the pipeline to resettle in the U.S.

Given the added security protocols and reductions in the number of refugees to be accepted, as few as 20,000 may be resettled this year, Morris explained.

“It’s certainly not compassionate painting victims of terrorism as perpetrators of terrorism,” Morris said. “It’s not what Pope Francis called us to do in terms of welcoming the stranger: providing welcome, assistance and protection for people in need like that.”

Parishioners from throughout the diocese who have dedicated time and resources in resettling refugees in Rochester should be concerned, he added.

“This is a country that has always made a place for people looking for peace and opportunity, who are fleeing terrorism, war and oppression,” he added. “The pope has been very clear about our obligation to foreigners and aliens in a foreign land. … The pope calls us to share (our) benefits that we enjoy and take for granted with people faced with the opposite.”

EDITOR’S NOTE: To listen to the stories of refugees who have been resettled in the Rochester region by Catholic Family Center, OVERSET FOLLOWS:visit cfcrochester.org/seeourstories.