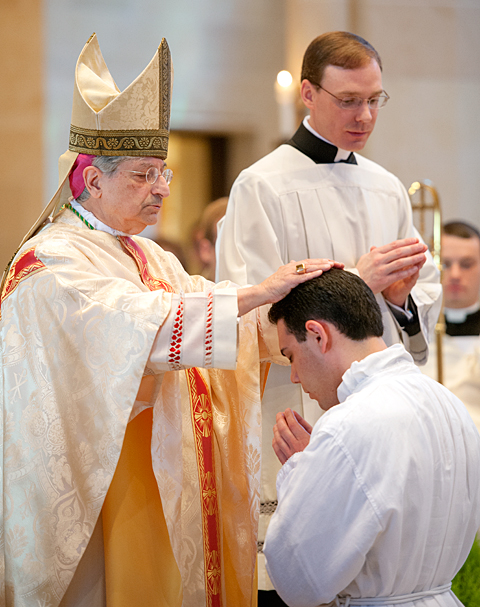 ROCHESTER — As temperatures soared toward the 80s on the morning of May 28, there also was an abundance of personal warmth emanating from Sacred Heart Cathedral.

This was evident around noontime on the cathedral steps, which filled quickly with folks offering hugs and handshakes for four men who had just achieved a major milestone: ordination to the diaconate for the Diocese of Rochester.

Deacons Anthony Amato, Juan Benitez and Michael Merritt became transitional deacons on the way to the diocesan priesthood, while Deacon Thomas Jack was ordained a permanent deacon. Bishop Salvatore R. Matano presided at the ordination Mass as a nearly full cathedral looked on.

Highlighting the two-hour event was the rite of ordination that occurred midway through Mass. It began with Bishop Matano laying his hands on each man’s head as they knelt before him one at a time. The bishop then completed the act of ordination by proclaiming the prayer of consecration.

The rite continued with the investiture of stoles and dalmatics, or tunics, on the new deacons; presentation of the Book of Gospels to each of them; and finally the sign of peace offered by Bishop Matano and a long line of permanent deacons who were in attendance, as were numerous diocesan priests.

Both Deacon Merritt and Deacon Benitez rated the bishop’s laying of the hands — an act essentially signifying that they had become deacons at last — as personal highlights.

"That’s the moment that the Holy Spirit came upon me," explained Deacon Merritt, who grew up in St. Mary Parish in Canandaigua. "It’s a moment I’ll never forget."

"I felt a big joy in my heart," added Deacon Benitez, a native of Medellin, Colombia, who also expressed elation that his ordination was shown on live video feed to family and friends back home.

With their transitional deacon status now secured, Deacons Amato, Benitez and Merritt remain on track to be ordained diocesan priests in 2017.

"I can’t wait to do (an ordination) again next year," said Deacon Merritt, who along with Deacon Amato noted that they’ve been in formation for five years each.

"It’s really a great joy that I have just one more year of seminary until I’m a priest," said Deacon Amato, from Greece’s Our Mother of Sorrows Parish. "I’m looking forward to spending the rest of my life as a priest, and I look forward to this year (as a deacon) to being able to preach the Gospel."

Meanwhile, Deacon Jack said the realization that he’s now a permanent deacon is "a little overwhelming." A member of St. John Vianney Parish in Steuben County, he added that he was grateful for the presence of well-wishers on May 28 who came from such faraway places as England, Canada, Boston and New Jersey.

"It’s great to have that much support," he stated.