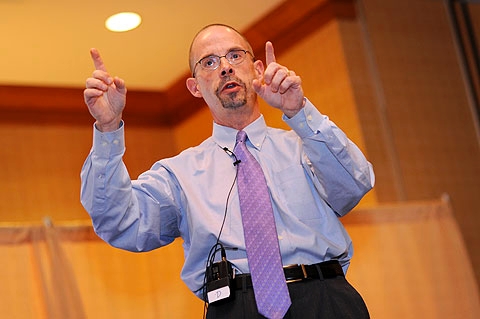 HENRIETTA — John L. Allen Jr. tells it like it is when assessing the Catholic Church — although he acknowledged this don’t sit well everywhere he goes.

"Often people are looking for things to confirm their prejudices, rather than challenge them — and that’s frustrating," said Allen, a noted Catholic journalist.

On the other hand, Allen said pastoral ministers in the Diocese of Rochester possess "a genuine appetite for knowledge and good ideas" regarding our evolving church. Henceforth, Allen served for the second straight year as keynote speaker at the Gathering of the Ministerium, held May 9 at the DoubleTree Hotel. The eighth-annual event — begun by Bishop Matthew H. Clark to bring together people in various leadership positions around the diocese — was attended by more than 400.

Allen, who serves as correspondent for National Catholic Reporter and Vatican analyst for CNN, continued his "The Future Church" presentation from the 2011 Ministerium gathering. He detailed several significant trends shaping the worldwide church:

* Islam. Allen highlighted two recent turning points that elevated the importance of this subject: the Sept. 11, 2001, attacks on the United States, touching off concerns about radical Muslims; and Pope Benedict’s efforts to engage in dialogue with Islam as evidenced by his historic 2006 trip to Turkey, which is 98 percent Muslim. These events have fueled what Allen describes as a burst of new energy toward serious dialogue on hard topics between Christians and Muslims, rather than "milk and cookies" exchanges.

* The "new demography." Allen noted the narrowing population gap between U.S. Anglos and Hispanics, saying that by the year 2030 Hispanics will account for 41 percent of the American Catholic population compared to 48 percent for Anglos. He added that there will be a drastic increase in Americans above age 65 by the year 2050, and suggested that parishes think of adding nurses to their staffs should Medicaid, Medicare and Social Security fail to meet this burgeoning population’s needs. Allen also wondered whether the growing rate of senior citizens will be embraced in parish life — "or are we subtly going to be communicating to them that they ought to be taking their religious business elsewhere?"

* Globalization. According to Allen, positive results of our increasingly global society have included the reduction of extreme poverty in developing parts of the world and the spread of democratic rule. On the negative side, there remains a huge gap between rich and poor, and the 20th century "was the bloodiest in human history." He added that globalization in the Catholic Church has been marked by increased input from Asia, Africa and Latin America in developing church policy, whereas what he termed the "nerve centers" were formerly confined to Europe.

* Pentecostalism. Allen cites this as the most rapidly growing religious movement in the world, with emphasis on lay leadership and empowerment of women among its appealing facets, not to mention the relative ease that a church can be started. He noted the drastic rise of "storefront mom and pop" Pentecostal churches around the world, saying, "All you have to do is throw open the doors of your garage and say, ‘Y’all come.’" He said Hispanics are particularly attuned to the charismatic aspects of Pentecostalism, meaning the U.S. Catholic Church is at risk of seeing its increasing Hispanic population shift toward Pentecostal influences. Already, he added, the percentage gap between then numbers of Pentacostals and Catholics is narrowing in Latin American countries that used to be overwhelmingly Catholic.

* Religious freedom. Allen said this is "destined to be the premier social and political concern of the Catholic Church in the 21st century." He pointed out that threats to religious freedom in the United States generally result in courtroom battles, but in other countries "it means you might get shot." He added that 80 percent of religious discrimination worldwide is directed at Christians, and 150,000 Christians per year die for their faith in a deeply disturbing trend that he describes as "the re-emergence of Christian martyrdom."

With many issues tearing at the fabric of the Catholic Church’s foundation, Allen emphasized that Catholics can ill afford to be divided among themselves — but, he said, many ideologies compete with each other within the church and that in turn weakens our effectiveness. He called for Catholics to respect each other’s positions, adapt to changes taking place in their local and worldwide churches, and in doing so strive to positively influence the rest of the world.