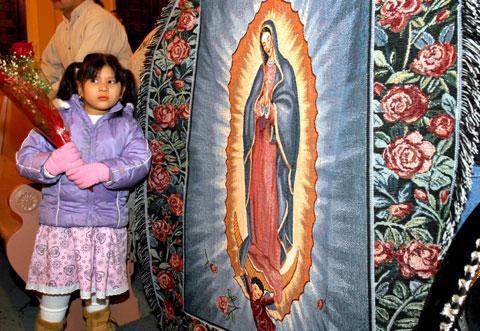 Two saints with devotions largely in Mexico but honored throughout Latin America represent the hope and preparation that are hallmarks of Advent, local diocesan officials say.

The feast of Our Lady of Guadalupe is celebrated Dec. 12, and there is an optional Dec. 9 memorial to St. Juan Diego, to whom the virgin appeared in 1531.

According to www.catholicculture.com, Dec. 9 is the date of the virgin’s first appearance to Juan Diego — an Aztec Indian who did not receive baptism until the age of 50 — as he was on his way to Mass at Tepayac hill on the outskirts of what is now Mexico City. It was on Dec. 12 that he followed Mary’s orders to collect flowers from that hill and deliver them to the local bishop in a plea to have a church built in her honor. He gathered those flowers in his tilma, or cloak, and presented them to the bishop. When he opened his tilma, the flowers appeared as the iconic image of Guadalupe.

As a key figure in the Advent story awaiting the birth of the son of God, Mary shows the faithful the importance of preparing oneself for Christmas, said Father Jesus Flores, the diocese’s coordinator of migrant ministry. And Juan Diego’s faithful response in heeding Mary’s call to action at Tepayac serves as a role model for followers of Christ, he said.

Brother Juan Lozada, director of the diocese’s Spanish apostolate, explained that Spanish missionaries such as the one who baptized Juan Diego also established in Latin America a strong devotion to saints that remains to this day.

Mary also is honored as patroness of every Latin American country — although in each country she is called by different names — and Hispanics are very devoted to her throughout the year, he said.

Another Hispanic tradition that carries on to this day is the Advent novena Las Posadas, the re-enactment of Joseph and Mary’s search for an inn before the birth of Jesus. According to an article in the Catholic Courier in December 2007, the nine-day tradition, which is held Dec. 16-24, is popular in many areas of Mexico as well as several Latin American countries as participants travel from house to house singing carols and asking the homeowners if they can enter.