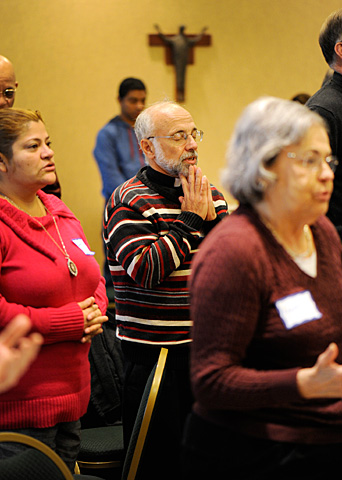 Diocesan officials have unveiled a Hispanic ministry plan and hope to get the word out to as many people as possible so they can join the movement and the efforts to make the plan a reality.

"We all have the power (to bring life to the plan)," said Lynette Saenz, director of cultural diversity for the diocese’s Parish & Clergy Services. "That’s why I’m very passionate about this work. It requires everyone’s participation."

The plan not only encourages parishes to seek out and identify the Hispanic families in their midst but also urges them to ask Hispanic parishioners to take on leadership roles, Saenz said during a Jan. 16 presentation of the plan at the diocesan Pastoral Center.

"We want to encourage parishes to include Hispanics on liturgy committees and be part of the decision-making process," she said.

Some parishes undertook informal censuses of the people in their pews during the planning process and were surprised at the number of Hispanics in their churches, Saenz noted. Such findings jibe with a report from the Center for Governmental Research, which shows that the number of Latinos living in the suburbs rose 77 percent from 2000 to 2010, she added.

More than 120 parishioners from city, suburban and rural communities helped develop the plan over several months last year, Saenz explained, with support from the diocese in terms of resources, staff and the hiring of a national consultant. The grassroots movement began last spring.

"All these movements are taking place and a lot of it is invisible to ordinary Catholics in the pews and to pastors," Father Joseph Hart, delegate of the apostolic administrator, Bishop Robert J. Cunningham, said following Saenz’s Jan. 16 presentation. "The movements are happening nonetheless."

Saenz said part of the plan’s next focus is to seek greater participation in the movement by educating parishes and pastoral leaders about the areas they should concentrate on in the next few years.

"I hope (parishioners) think of this as an invitation to realize the plan and find out how … (to) get involved," she added.

Bruni Martínez, coordinator of Spanish ministries for Rochester’s Holy Apostles Church, is hopeful that Hispanic parishioners will become more involvement in their parishes despite their low participation in the planning process.

"I hope the plan comes to fruition," she said.

She also hopes that diocesan officials will meet with parish-ministry coordinators to help reach that goal. Saenz said she has already begun having such meetings, which are part of the implementation process.

"We have a process for parishes … to help them integrate the plan," she said. "I want parishes to take ownership."

And while she understands the perception that a lower number of parishioners participated in the planning process, Saenz said that having more than 100 people take part provided a good statistical representation of Hispanics throughout the diocese. Additionally, the Hispanics who took part came from several different Latin American countries, she added.

"People were very thoughtful in their recommendations," she said. "That’s why it’s a very good plan."

Such a plan also should help pastoral leaders who sometimes find it challenging to undertake Hispanic ministry, often due to cultural and linguistic differences, Bishop Cunningham wrote in a letter of support.

Over the next few months, Saenz and diocesan staff and volunteers will distribute the plan and inform interested parishes about its findings and recommendations. Pamphlets listing the plan’s mission, core values and pastoral priorities also will be left in the pews.

The core values outlined in the plan are community, tradition, service, unity in diversity and the Eucharist. The four pastoral priorities based on those core values are:

* Missionary option: Reach out to inactive and non-Catholics, promote the family as a domestic church, intensify advocacy efforts for the migrant community, and use social media to promote programs and services to Hispanics.

* "Pastoral de Conjunto": Promote the understanding that Hispanic Catholics are full members of Christ’s body, establish formal channels of communication with pastoral leadership, create a place for Hispanics in decision-making and promote the involvement of Hispanic professionals within the church.

* Liturgy and prayer: Develop and train priests and ministers in Spanish, increase opportunities to celebrate liturgy in Spanish and place more emphasis on the Rite of Christian Initiation for Adults.

Some of the challenges that the planning process uncovered in terms of the liturgical aspect were that RCIA is only available in English, and Spanish Masses in Rochester are all held around same time.

"So, if they can’t make it (to the Spanish Mass), they are forced to attend a Mass in English," Saenz said. "There are no other options (for attending a liturgy in Spanish)."

On the positive side, some of the recommendations in the plan are already in the implementation phase, Saenz noted. Workshops on multicultural parish models have been scheduled as well as training for teenagers and young adults who are interested in ministry. Programming at El Instituto de Pastoral Hispano (Hispanic Pastoral School) of St. Bernard’s School of Theology and Ministry also has been revamped. The Instituto will now offer a certificate program for designated ministries and advanced certification program for lay leaders as well as continuing-education courses, Saenz explained.

A Hispanic Commission also is being put together to serve as a sounding board and make sure the plan continues moving in the right direction, she said.

"We can’t just say, ‘We have a plan. Good,’ and it goes on our shelf," noted Father Hart. "We’ve got to be putting this into practice."