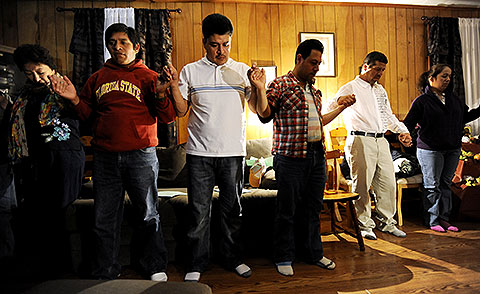 BROCKPORT — A glowing statue of Our Lady of Guadalupe greeted visitors who arrived at Digna Renz’s home as part of a mission to bring migrant workers back to church.

In front of the statue, Renz had set up a small altar with vases of flowers and photos of her deceased family members for Father Jesús Flores to celebrate Mass Nov. 8. She joked that her husband bought a dozen roses for the occasion but they were for the Virgin Mary, not her. Father Flores brought the Eucharist in a special traveling case as well as a missal.

When Renz heard that the Guadalupe image was traveling to Brockport-area homes where Mass would then be celebrated or the rosary recited, she jumped at the chance to have the image at her home, she explained as visitors arrived.

Although originally from Panama, she has lived in Brockport for almost 40 years and has come to befriend the Mexican community, whose members she has met at Mass at Nativity of the Blessed Virgin Mary Church.

The idea for the mission came during a church meeting in September, explained Penny Gardner, migrant minister for northwest Monroe County and Livingston County.

"We noticed the numbers (of migrant workers at Mass) were down," Gardner said. "We thought, ‘How can we renew ourselves?’ So, we decided Guadalupe would go on mission to whoever would receive her."

Alicia Jocoba, a native of Michoacán, Mexico, jumped at the idea and also hosted a Mass on Nov. 1. About 30 migrant workers from nearby Martin Farms attended, she said, since Mass also coincided with the Mexican celebration of Day of the Dead.

"I think this (effort) is a great idea," she said. "The people have not been coming to church … I hope this changes that."

The reasons for the lower numbers are many, explained Gloria Castañeda, who attended the Nov. 8 gathering with her daughter and daughter-in-law. Many migrant workers have to work on Sundays until the final harvest, said Jocoba and Castañeda. Also, immigration enforcement continues to keep people in their homes if they’re not working, added Castañeda. And the church itself has gone through many staffing changes in recent years, causing some families to give up going to Mass, she said.

"Every change has pushed away more people," said Castañeda, also a Mexico native. "(But) this (mission) appears to be unifying us again."

Since the mission began in October, families from the parish have hosted Guadalupe every week, Gardner noted. The mission was to continue until the beginning of Advent, she said.

"It has been a very intimate experience, … a chance to pray together and get to know each other," Gardner added. "It’s a chance to open our hearts with Mary’s guidance to the way God is working in our lives."

But until harvest time is over, those who have participated in the mission won’t know how successful it was in bringing families back to Nativity of the Blessed Virgin Mary Church, added Castañeda.

"We are still waiting to see," she said. "We have to have faith."

The importance of faith was the topic of Father Flores’ homily during the Nov. 8 gathering and Mass. Throughout the mission, he has demonstrated a "real gift" of relating the role of faith in people’s daily lives, Gardner noted. Father Flores said that he wants to ensure that people understand the Gospels and how they connect to everyone’s lives.

"When we are able to enjoin our lives and our Catholic life, something good happens," he said. "When we are touched by God’s word in our lives, we have life. We have strength."

During the Nov. 8 gathering, Father Flores asked the group of 10 people what they had learned from the readings about the widows who gave of the little they had and not of their plenty.

Carmela Coccitto, a widow, told of an experience she had in her native Italy with a tour group. She said that she was so exhausted from six hours of walking on the first day of the trip that she didn’t think she would even be able to take a step the next day. But she prayed nearly all night to St. Pio of Pietrelcina, and the next day she woke up without any pain after only three hours of sleep and walked for two more days, Coccitto added.

"I was singing songs with joy," she said. "I wish everybody had the same feeling, the same faith. Life would be so easy."