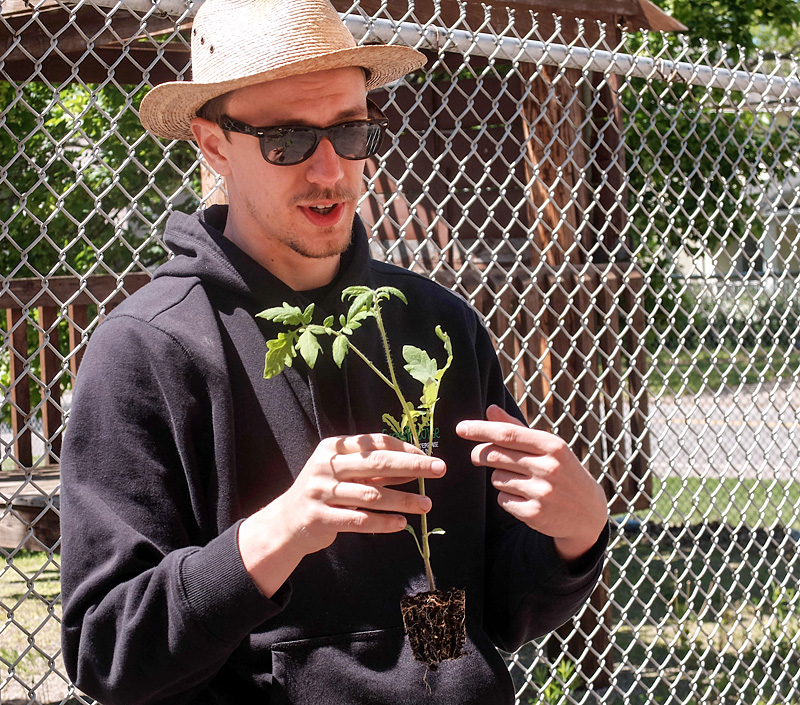 Nathaniel Mich of Foodlink explains how to plant a tomato plant during program at the Cathedral Community Garden program on May 20 in Rochester. The program in in its fourth year and is working towards having people grow their own food. Courier Photo by John Haeger

ROCHESTER — Parishioners from The Cathedral Community worked alongside neighborhood residents last month as part of a gardening project to benefit the parish’s food pantry.

On May 24, participants in the project gathered in the driveway of Sacred Heart Cathedral’s former school for the third of four "Adopt-a-Crop" sessions. Marcus Ebenhoe, The Cathedral Community’s social-ministry coordinator and pastoral minister, told participants to "tickle the roots" of the plants they were receiving so the plants would successfully transfer to their new homes.

About half of the more than 100 people who registered for the program took advantage of taking the free plants so they could grow their own bush beefsteak tomatoes, green bell peppers, collard greens and marigold flowers, Ebenhoe noted. Each participant received one or two of each plant, and the plants were placed in compost soil in a large biodegradable canvas tote. The plants could be kept in the tote or transferred to a garden, Ebenhoe said.

Participants also can use their totes to return any extra produce to share with the food pantry, Ebenhoe noted. Plants that didn’t go home with anyone would be planted in the garden located across the street from the cathedral and adjacent to the school, he added.

Kellie Benedetti of Rochester said she decided to take part in the initial "Adopt-a-Crop" session May 20 after receiving a flier about the program when she visited the food pantry. She returned for more plants May 24 because a couple she had received did not survive.

Her roommate’s 5-year-old daughter tagged along both times, she said, as Benedetti is teaching her about gardens. The two even used wooden planks they found along a curb to build raised beds, Benedetti said.

"We got our little tote bag and learned a lot of information," she added about the project. "It was a lot of fun."

The project itself is "beautiful," added Benedetti, especially as someone who receives food from the pantry as needed.

"It’s a great way to teach people how to grow sustainable food," she said. "They (pantry volunteers) give so much to us. The food there is amazing. It’s such a huge help. … For us to be able to help and give back is amazing."

Kenneth LaBarge and his mom, Helen LaBarge, will be placing their plants in a garden they made from the empty shell of an old dishwasher. In the past, their garden has yielded enough produce to feed them for a summer. They also go to the pantry for food when they are running low, so they were happy to take some plants and work on helping grow food that would help other people, Kenneth LaBarge said.

"This (project) helps people become more self-sufficient and give back at the same time," noted parishioner Louis Viera Jr., who came up with the idea for the project. "The price of produce keeps going up and up, and this helps people grow their own vegetables."

He added that he was thrilled by the number of participants.

"If we had only 10 people, I would have considered this a success," he said. "Hopefully, this will spark a fire and (the project will) grow bigger and bigger every year."

The cathedral’s three-year-old garden also is limited in space, so the project provided an opportunity to grow more produce and "at the same time educate people," Viera said.

All the materials and plants were donated by Foodlink, which also is the major provider of food for the The Cathedral Community’s food pantry, Ebenhoe noted. The compost-soil mixture came from the agency’s mushroom farm, he added.

"The plants love it," Ebenhoe said. "It’s nutritious for them."

Ebenhoe said he hopes the cathedral can get plant donations again next year so the project can continue.

"I would love to make this an annual tradition," he said.