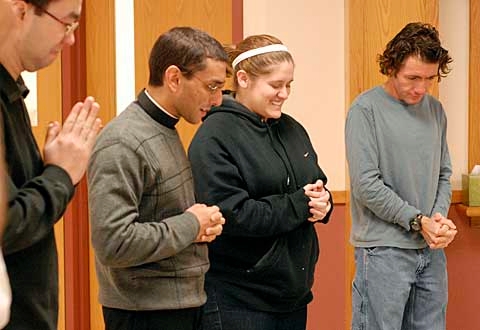 But the members of the 20s-30s ministry from Peace of Christ at St. John the Evangelist Church made the best it on Three Kings Day when illness and injury waylaid many of the participants for their Jan. 6 fiesta, organizers said.

The idea for the first-time event included serving a wide variety Latin dishes, showcasing traditional Latin music and dance, and recounting personal stories of the grandeur that is Feast of the Epiphany in the Latin American culture, said Yanina Rivera, whose husband, Wilfredo, is from Puerto Rico.

It was Yanina Rivera who brought the idea to the group having experienced such lively festivities with her husband’s Puerto Rican family, said Liz Webster, who serves as the 20s-30s group adviser.

"She’s trying to keep the customs of his family alive and well for her (child)," noted Webster.

It’s also part of the group’s mission to boost young adult involvement in parish life, said Dean Ganskop, another member of the ministry.

"We’ve only been active for about a year," he explained. "It takes a while to get a following."

While the group’s plans weren’t realized, Rivera’s in-laws and other group members still came through with food for what ended up being an intimate gathering of about 15 people in the church hall.

In addition to sampling Latin foods, those who attended also shared their own family experiences related to the Epiphany.

Kim Dreier of Rochester heard about the event at Mass, and said it sounded fun. She said her family had always marked the 12 days of Christmas when she was growing up and kept its tree up until the Feast of the Epiphany.

"We never had a tradition but we always recognized it," added Dreier, who had never sampled Puerto Rican food before the event.

"We always got gifts," he said. "I got gifts today from my mother."

Rivera explained that in Puerto Rico — at the same time the group was gathered at St. John the Evangelist — her husband’s family would be out walking from the home of one friend or family member to another while playing guitars and singing. The tradition is a form of caroling called "parrandas," she said. The prior evening, the children would have made baskets and collected grass to place under their beds for the kings to fill with presents.

Family members here in Rochester do their best to maintain those traditions even in the bitter cold of Rochester, she noted. The family also exchanges gifts on Three Kings Day and opens those sent from Puerto Rico.

"Because we’re not in Puerto Rico, it’s hard to celebrate here," Rivera said. "In New York City, they do large parades. When you don’t have a (big) community like that, it’s hard to do."