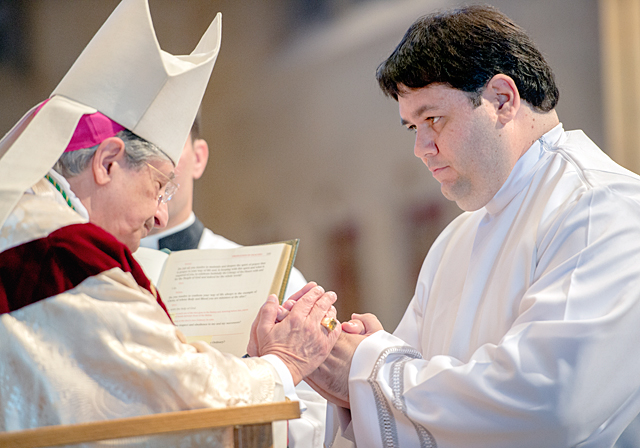 Five men are set to be ordained deacons on Saturday, May 28 — one to the permanent diaconate and four as transitional deacons en route to ordination as diocesan priests in 2017.

Anthony Amato, 29, is a native of Greece’s Our Mother of Sorrows Parish. He earned a bachelor’s degree in philosophy and religious studies in 2008 from the University of Rochester, and a master’s in systematic theology in 2011 from Boston College School of Theology and Ministry.

Amato entered Becket Hall, the diocesan pre-theology program, in 2011 and a year later began seminary studies at Theological College in Washington, D.C. He served his pastoral year in 2014-15 at Auburn’s St. Mary and St. Mary/Martha parishes. His fourth and final year of seminary in 2016-17 will include diaconal duties at the Washington Archdiocese’s Cathedral of St. Matthew the Apostle.

Amato remarked that among the many supporters on his path to the priesthood, the most significant one has been Jesus Christ.

"It was kneeling in front of the Blessed Sacrament that I knew that if I gave my life to him, he would take care of me," he said.

Juan Benitez, 28, was born and baptized in Frontino, Colombia. His home parish is St. John Vianney in the Colombian city of Medellin. He began priestly studies in his native country and entered Becket Hall in January 2013, joining several other Colombian men who in recent years have pursued priesthood for the Diocese of Rochester.

While living at Becket, Benitez assisted at St. Thomas More and Our Lady Queen of Peace parishes in Brighton. In May 2014 he moved to Peace of Christ Parish in Rochester and Irondequoit. He also took English classes at Nazareth College. In August 2014 he began studies at St. Mary’s Seminary and University in Baltimore, where he is due to finish up in December 2016.

"I feel a great joy in my heart as this day is coming very soon," Benitez said of his diaconal ordination. "I am willing to serve the church in the Diocese of Rochester with all my heart, by using the gifts God has given to me."

Thomas Jack, 42, is this year’s lone addition to the diocesan permanent diaconate. Raised in New Jersey, he earned a bachelor’s degree in religious studies from Montclair State University, a master’s in religious education/spirituality from Fordham University and a master’s in pastoral studies this year from St. Bernard’s School of Theology and Ministry.

For his diaconal field experience, he interned at Catholic Charities of Steuben County and Elmira Correctional Facility, and had a summer placement at Ss. Isidore and Maria Torribia Parish in Steuben County.

Jack belongs to St. John Vianney Parish, also in Steuben County. He works for Freeman, a contracting organization that arranges trade shows. He and his wife, Filomena, have no children "but lots of nieces and nephews that we love," he said.

"I thank God for the opportunity to participate in the church’s outreach to those on the margins of society," he added.

Michael Merritt, 28, hails from St. Mary Parish in Canandaigua, and he credited his pastor, Father Thomas Mull, and youth minister, Dawn Burdick, for influencing his decision to pursue a priestly vocation.

Merritt graduated from Siena College in 2010 with a bachelor’s degree in religious studies. He entered Becket Hall in 2011 and the following year began at St. Mary’s Seminary and University in Baltimore, where he is wrapping up his third theological year.

He logged his pastoral year in 2014-15 at Holy Cross Parish in the Charlotte section of Rochester, where personal highlights included working with parish youths as a basketball coach and altar-server coordinator.

Merritt said the fact that his diaconal ordination is coming up so soon "is a bit overwhelming at times."

"But I am excited for the celebration, and excited to take the next step in my formation journey," he remarked.

Victor Sanchez, 29, is a native of Ocana, in the Colombian Department of North Santander, where he belonged to the Parish Cathedral of St. Ann. He attributes his strong vocational call to having attended church frequently with his mother.

He began priestly studies in Colombia, then entered Becket Hall in 2012 and took English classes at Nazareth College. In 2013-14 he began his pastoral year at St. Margaret Mary Church in Irondequoit, finishing that year at St. Louis in Pittsford. Sanchez entered St. Mary’s Seminary and University in Baltimore in the fall of 2014 and is completing his final theological year there.

"I feel a little bit anxious, but I think that this what I really want for my life," he said of his diaconal ordination.

"I love my vocation and my ministry. I want to thank God for everything he has done for me. I also give thanks to all the people who have supported me during all these years."