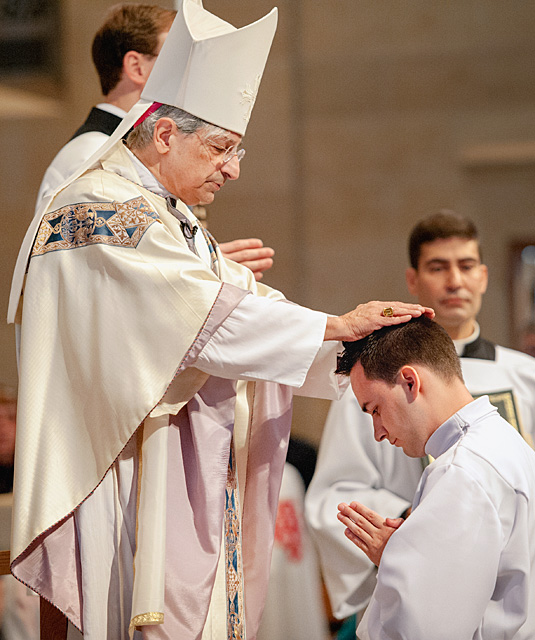 ROCHESTER — On the morning of June 7, Matthew Jones made a concise Facebook post — "Beautiful day for an ordination" — about an hour before the beginning of a milestone Mass in which he was to be involved in.

By early afternoon, Jones — now Deacon Jones — was accepting congratulations on the steps of Sacred Heart Cathedral as the sun shone brightly. However, he noted that the day’s beauty was not so much based on the weather, but the moving ordination liturgy and the presence of many well-wishers at the cathedral.

"How could it not be beautiful?" he remarked to the Catholic Courier.

The Mass was equally memorable for the four other deacons ordained along with Deacon Jones: Deacons Michael Fowler, Bruno Petrauskas, Carlos Sánchez and Daniel Ruiz Sierra.

This marked the first diaconal ordination Mass in Rochester for Bishop Salvatore R. Matano, who during his homily reminded the five men that "you are all to be instruments of unity, peace and reconciliation within the body of Christ."

Deacon Petrauskas said his most vivid memory of the ordination rite occurred when Bishop Matano laid his hands on the deacon’s head.

"I could feel the power of the Holy Spirit," he recalled.

Meanwhile, Deacon Fowler said he sensed a profound spiritual presence while he and his fellow deacons laid prostrate for several minutes, as the Diocesan Festival Choir led the congregation in the Litany of the Saints.

"When the nose hits the marble, there’s something going on there," Deacon Fowler said. "God is doing for us what we can’t do for ourselves."

The Litany of the Saints also registered strongly with Deacon Sierra, who said he could feel the saints’ presence.

"It so clearly shows that all the people of the church, including the saints, were with us in prayer, so I can do my work," Deacon Sierra said.

Deacon Sánchez — who, like Deacon Sierra, is a native of Medellin, Colombia — recalled that he was "a little afraid and very, very happy" while lying prostrate. He said he took that occasion to reflect on all the people in his home country, as well as in the Diocese of Rochester, who have supported him on his vocational journey.

Shortly after Bishop Matano completed the rite of ordination, the new deacons were recipients of hugs and handshakes by several dozen permanent deacons, who sat near the altar during Mass along with a host of diocesan priests.

Although Deacon Petrauskas — a member of Rochester’s St. Frances Xavier Cabrini Parish — was the only permanent deacon for the Class of 2014, the four transitional deacons mark the largest total for the Rochester Diocese in many years. Those men will finish up their seminary studies beginning in the fall, and are due for priestly ordination in a year.

In a nod to the two South American men being ordained, the ordination liturgy’s first reading was proclaimed in Spanish. Special recognition also was given to Bishop Emeritus Matthew H. Clark, who concelebrated the Mass. As Bishop of Rochester for 33 years until his 2012 retirement, Bishop Clark was the diocesan leader when the new deacons began their formation.

"I fully realize that they have grown up under your guidance and direction," Bishop Matano told Bishop Clark shortly after Mass began.

Bishop Matano also gave public credit to the many seminarians present in the cathedral.

"Don’t you think they’re rather heroic in this day and age, to accept the call to follow Jesus in an ordained ministry?" he said, eliciting applause from the congregation.