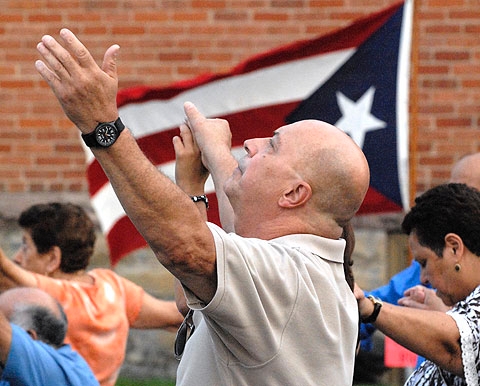 ROCHESTER — As the flag bearers descended the steps of St. Michael Church , the group of spectators gathered in front of the church cheered them on: "¡Que viva México!" and "¡Que viva Puerto Rico!"

The flags represented the heritages of the parishioners of St. Frances Xavier Cabrini whose families or descendants come from countries as varied as Ireland, Italy, Germany, Brazil Cuba and Colombia. The flags then were placed along the border of the altar and folding chairs that were set up for the first outdoor Mass in the church’s parking lot at North Clinton and Clifford avenues on Aug. 31. Those of the United States and Vatican City were front and center.

The Mass kicked off the annual Festival del Barrio, which was held Sept. 1-2 in the church parking lot. Father Bob Werth, copastor of St. Frances Xavier Cabrini, had introduced the idea for the outdoor Mass during festival planning earlier this spring and committee members jumped on the idea, he said.

"It was really nice that they had gotten the flags from all the (countries)," said Margaret Oberst, who attended with her husband, Eugene. Both attend Mass at Church of the Annunciation, which, along with St. Michael and Our Lady of the Americas, is a worship site of St. Frances Xavier Cabrini.

"We definitely as a parish have so many ministries to help the neighborhood," she added. "This (Mass) is a nice way to show the faith in it."

The festival committee was pleased with the response for the Mass, which was attended by about 150 people, said Mario Escalante, a committee member.

"This has been a great success in every sense of the word," he added.

Because while the festival provides food, music, and a fun, safe environment for the church’s neighbors, the parish community needs to offer a spiritual aspect as well, added Escalante.

"All three parishes (Annunciation, St. Michael and Our Lady of the Americas) are in a strategic position of influence," added Father Werth. "We see the potential, the potential in every single person here."

Deacon Agenol Rodríguez also encouraged those who attended the outdoor Mass — which included people from all of the parish’s worship sites — to be as welcoming as possible during the Festival del Barrio.

He said that those working or gathered at the festival were not to turn anyone away because of their appearance or if they walked over from one of the street corners. True Christians would not condemn these people for the vices or addictions that bring them to the street corner, but help them put on a new dress by turning away from those vices, as urged by St. Paul, explained Deacon Rodríguez.

"We must be compassionate with these people," he said.

Because by demonstrating caring and kindness to such people, the church community can teach them that they, too, can be transformed by the love of Jesus Christ, he said.

"We can show them that we are true Christians … not by word but by deed," added Deacon Rodríguez.

And the parishioners who attended the Mass also made important statements of belief through the simple act of leaving their houses to come to "La Avenida," remarked Father Werth.

"We believe … in this neighborhood," he said. "We believe the desert can become the orchard. We believe it’s going to bloom. … And I want to do something to make that community better."