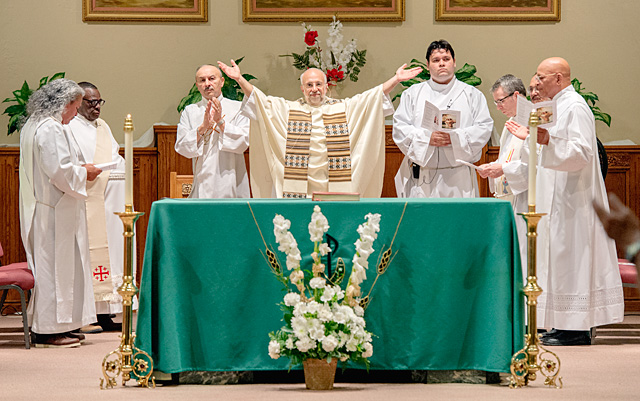 ROCHESTER — Newly ordained Deacon Jorge Ramírez beamed with joy from the altar as he participated in the celebration of the annual Mass marking the feast day of St. John the Baptist.

Even though he has been assigned to Peace of Christ, he said that he welcomes any opportunity to be in communion with the Latino parish community. Deacon Ramírez was one of three men ordained June 6 as transitional deacons, which means they will continue on in formation to the priesthood.

"I have been very blessed by the Lord," he added.

Many of the 75 people who attended the June 24 Mass congratulated Deacon Ramírez after the celebration of St. John the Baptist’s birth.

St. John the Baptist also is the patron saint of Puerto Rico, and as such, there were many festivities on the island, Deacon Agenol Rodríguez noted during his homily. But many of those people were likely following the tradition of immersing themselves in the ocean for luck and they may not have included the celebration of Mass in their activities, he said.

"If you come to church, this is where we are celebrating," Deacon Rodríguez said. "We can also celebrate in a park or on a beach … but only if we are following God’s command."

If God is not in our hearts and we veer off the course he lays out for us, we are wasting time, he said.

"God has a plan for each and every one of us," added Deacon Rodríguez.

In the Gospel story of Elizabeth and Zechariah, God punished Zechariah for not having faith and he lost his voice, he said. But his voice was restored at the baptism of the couple’s son, when Zechariah named him John to announce the salvation of Jesus to the world, Deacon Rodríguez explained.

"He opened his mouth to praise and glorify the Lord’s name," he added. "That is what we should do as well."

As John the Baptist was called to "prepare the way of the Lord," so those present at the Mass are being called to follow the path that God has set forth for them, said Deacon Rodríguez.

"He is giving us a chance at eternal life," he said.