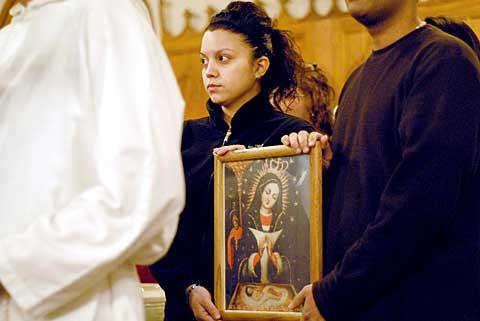 ROCHESTER — Elisardo and Mena Pardo have donated food for the annual celebration of Nuestra Señora de la Altagracia, protectoress of the Dominican Republic, as a promise they made to the Virgin Mary a decade ago.

The couple, who moved to Rochester 15 years ago, made the promise in thanksgiving for the continued good health of their son, who was born premature.

The family owns El Eden, one of three restaurants that donated food for the convivencia that followed the Mass Jan. 21 at Our Lady of the Americas Parish. The other restaurants were El Latino and El Sabor de la Isla.

Elisardo Pardo said that the feast day of Nuestra Señora de la Altagracia holds a special place in the hearts of Dominicans.

Now in its 15th year and attended by nearly 200 people, this year’s Mass took on special significance because of the massive earthquake in Haiti, which shares the island of Hispañola with the Dominican Republic. A special collection raised more than $250 to help with Haiti relief efforts in addition to $2,000 already raised by Our Lady of the Americas Parish.

Also during the Mass, more than 20 children placed flowers before the portrait of Altagracia.

He said that this expression of solidarity with their Haitian brothers is an example of how the Dominican people follow the example of Nuestra Señora de la Altagracia. The display of the Dominican people’s Christian faith — through participation in relief efforts and the reconstruction of their neighbor’s cities — has superseded the power struggle between the two countries over control of the island of Hispañola, Father Panepinto remarked.

"This is a shining moment for the Dominican people," he said. "You honor the Virgin of Altagracia by working with great grace … for Haiti and the justice and reconciliation of the two cultures that live together on the island of Hispañola."