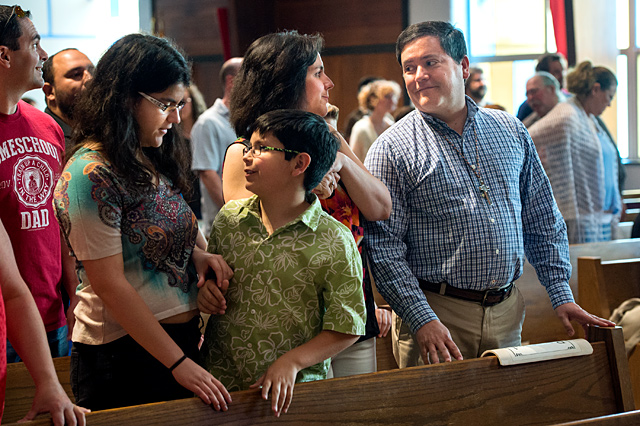 Members of the Rivera family, from left, Victoria, 18, Antonio, 10, Rita, and José offer each other a sign of peace during a May 28 Mass at St. Leo Church in Hilton.

GREECE — Will my children still practice their faith when they’re older?

Many a parent shares this concern — and rightfully so, said Rita Rivera.

"With the secular culture, it’s so hard to keep kids going to church," she acknowledged.

Yet she and her husband, José, have devised what for them is a winning formula, based on the high participation level of their four children at St. Leo Parish in Hilton.

"Our way of thinking is, if we get them involved doing things they like, using their talents, they’re going to want to be in church. They will feel they belong," Rita said.

In fact, the Rivera family is so dedicated to its parish and community that it has netted a major honor from the Knights of Columbus: New York state’s Family of the Year.

The Riveras were honored April 28 during the Knights’ annual state convention in Callicoon, N.Y., after having been nominated by Neil Combs, a fellow St. Leo parishioner.

A key factor in the state distinction has been the Rivera kids’ involvement in St. Leo’s youth-ministry program. Carlos, now 21 and a senior-to-be at SUNY Fredonia, has been a musician for Life Teen Masses. His sister, Victoria, 18, who will be a sophomore at SUNY Geneseo, has served as a lector at Life Teen liturgies. Both she and Carlos also have assisted at vacation Bible school and received diocesan Hands of Christ Awards.

Ana, 15, said she was inspired to take on her current duties as an altar server by observing Carlos perform in that role in past years.

"I was watching him, thinking, ‘This is the coolest thing ever, I want to do it too,’" said Ana, who was confirmed earlier this year. She also volunteers at Second Time Treasures, a thrift-store ministry at St. Leo.

Antonio, 10, has assisted at various parish events with his family and plans to join youth group in the fall, following in the footsteps of his three older siblings.

Carlos said that ideally, the model set by his family will spur other youths toward greater church involvement.

"I hope it shows that because it’s something we really enjoy, it will kind of help spread that fire," he said.

The Rivera children take their cue for volunteerism from their parents. Rita is a leader and assistant with several ministries at St. Leo, among them vacation Bible school, religious education, high-school youth ministry, Life Teen, sacramental preparation and the ChristLife evangelization program.

Meanwhile, José’s long list of faith-related activities includes St. Leo Council 9461 of the Knights of Columbus, for which he is a fourth degree Knight and has filled served leadership and outreach roles. Also at St. Leo, he serves in liturgical ministry and teaches youths as well as adults. In the Diocese of Rochester he has volunteered for the first two Rochester Catholic Men’s Conferences; has been a volunteer counselor at St. Joseph’s Neighborhood Center in Rochester; and is just beginning duty in the diocesan Tribunal assisting with Spanish translations.

In the area of pro-life activities, José started the first 40 Days for Life campaign in the Rochester area in 2008, and it continues to this day. The Riveras maintain a strong association with the Focus Pregnancy Center in Rochester, and in January 2017 José and Rita took Ana and Antonio to Washington, D.C., to take part in the March for Life.

Together, José and Rita have been involved with St. Leo’s pre-Cana team as well as the Rochester Cursillo Movement. They will celebrate their 25th wedding anniversary this Dec. 20 after having met 33 years ago in their native Puerto Rico.

José remarked that upon receiving word that his brood had been named Family of the Year, "it was a very strange feeling."

"I don’t feel like we’re doing this to get recognition," explained José, who is a current-product engineer for Kodak Alaris. "But I also recognize what a huge honor it was."

Perhaps the biggest honor for José and Rita is their children’s stated desire to continue immersing themselves in their faith.

"All my mom and dad have done, it’s a way to see that it doesn’t really stop when you go to college or get a job," Victoria said. "They’ve set maybe a very high standard, but it’s like, I want to get there someday."