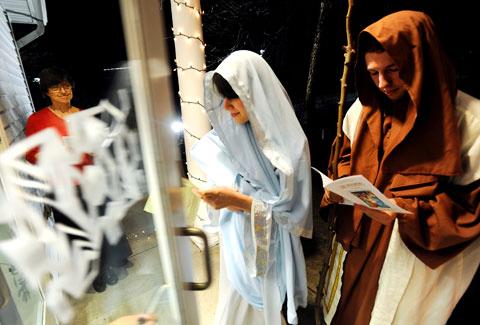 PITTSFORD — While Marina Soubotin did not grow up celebrating Las Posadas, the native of Argentina enjoys participating in the annual Nazareth College re-enactment of Mary and Joseph’s journey to find shelter for the birth of Jesus.

Las Posadas are a series of nine nightly processions that take place mainly in Mexico and other parts of Central America, according to information from Professor Carolina Casella, who organizes the Casa Hispana event. People dressed as Mary and Joseph accompanied by an angel knock on neighbors’ doors but are denied entry several times. Once they are welcomed, songs of celebration follow, and this journey is repeated from Dec. 16 to 24.

Casa Hispana has hosted the Las Posadas tradition for about four decades, said Professor Ed Malinak. Casa Hispana also houses the offices of the Spanish department faculty and hosts various cultural activities for students and the community throughout the year.

As the crowd of more than 50 people, many of them students, stood holding lit votives during the Dec. 4 celebration of Las Posadas, the students portraying Mary, Joseph, an angel and the Three Kings walked to three of the doors at Casa Hispana and asked for entry. At the third door, they were allowed in and singing of villancicos — Spanish Christmas carols — by the entire gathering followed.