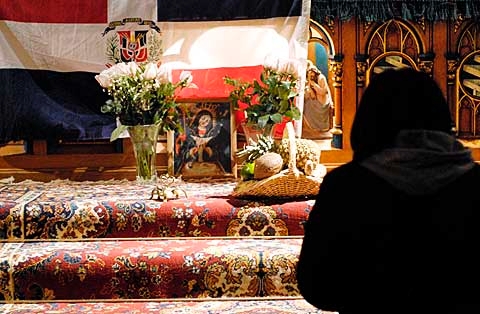 ROCHESTER — The frigid temperatures and blustery winds on Jan. 21 did not exactly give off the tropical vibes of the Dominican Republic.

But nearly 200 people braved the weather to celebrate the feast day of Nuestra Señora de la Altagracia, the Caribbean island nation’s protector, at St. Michael Church. Among them was Anastasio Garcia-Giron, who has been attending the special Mass for nearly a decade.

"For me, it’s very important," to honor Mary on this feast day, remarked García-Girón, remarked during the gathering after Mass. Local restaurants — including El Eden and 3 Latino — donated the food for the annual celebration.

He brought along his three children and his 7-year-old daughter, Ariana, was one of the three girls who carried bouquets of roses to place before the portrait of Altagracia that sat in front of the altar, on which was placed the Dominican flag.

"Since I was a child, my mother spoke to me about the Virgin … and how she was the light that would light my path, and I followed her footsteps," added Garcia-Giron, who moved to Rochester in 1995. "And everything has turned out well for me."

During his homily, Deacon Bienvenido DeJesus explained that Dominicans have two adorations of the Virgin Mary. They honor their patroness, Nuestra Señora de Merced on Sept. 24, but Nuestra Señora de la Altagracia is more revered, he noted.

A basilica in her honor now stands above a tree in Higüey, where her image is believed to have first appeared in 1502, Deacon DeJesus explained. That was the same year two brothers from Spain brought a portrait of Altagracia to the Domincan Republic, he said, and many miracles since have been attributed to her intercession.

According to said Alexis Guerrero, who is from Higüey, people travel to the basilica from all over the country to honor Mary for answering their prayers, bringing with them such thanksgiving offerings as cows.

"Above all else, the people come together to celebrate … and share," he added.

A well-known miracle associated with Altagracia is a story about the request of a rich merchant’s daughter, Deacon DeJesus said. As her father prepared to leave for a trip to Santo Domingo, the daughter asked that he bring back an image of Altagracia, which she had seen in a dream. The father could not find the image anywhere, but when he stayed at a friend’s home in Higüey, he encountered an old man with a long beard who pulled the image out of a bag and gave it to him. The next morning, the old man disappeared.

"That image represents the birth of Jesus in a manger in Bethlehem," noted Deacon DeJesus.

The image is important to all Christians, not just Dominicans and not just Catholics, who must remember that the Virgin Mary is mother of all, he added.

"Each one of us is heir to the kingdom of God," the deacon said. "Mary plays an important role in that destiny. And it’s no accident that so many Latin American countries have such a strong devotion to the Virgin."

He further implored everyone present to make a promise to bring a friend to next year’s celebration to keep this important tradition alive for all Dominicans and other Latinos in their new country.

"She showed you the way here," he said. "She still welcomes you with open arms."