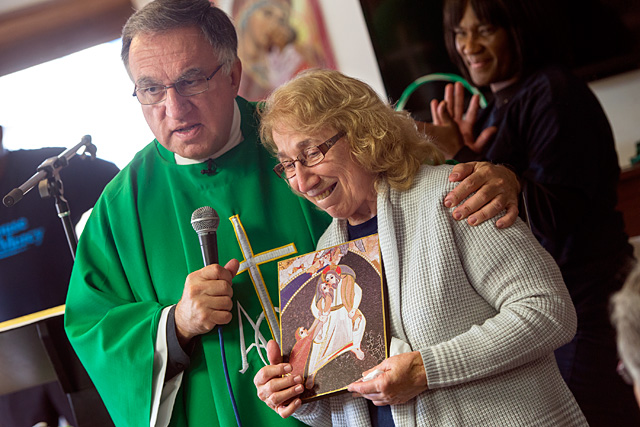 ROCHESTER — During a Nov. 6 liturgy celebrated at the House of Mercy, Basilian Father Thomas Rosica had the congregation repeat the words of Mother Teresa that were on a business card that she had given him years ago.

Father Rosica was back in his native Rochester after an August visit to the House of Mercy, prompted by a two-page letter from Sister of Mercy Grace Miller who created the homeless shelter 31 years ago. She said she wanted him to not only visit the House of Mercy and learn about its work, but also lead a retreat and serve as the keynote speaker when the house moves into its new building at 259 Ormond St.

The building has been under renovation and is slated to open in January, said Kelly Finnigan, director of operations at the House of Mercy.

"I never expected the reaction we got," Sister Miller said of Father Rosica’s initial visit. "He had tears. … He called this Third World (poverty)."

During his homily Nov. 6, Father Rosica said his August visit helped him prepare for his role as commentator during St. Mother Teresa’s canonization in Rome on Sept. 4.

"My visit on that day really … provided the backdrop to what I’d be experiencing in Rome," he added.

Father Rosica has served as English-language assistant to the Holy See Press Office since 2013. He also is chief executive officer of Salt + Light Catholic Media Foundation in Toronto.

The Salt + Light TV arm is now in the midst of producing a three-part television documentary to air the week before Christmas. The story of Sister Miller and the House of Mercy will be featured in the first part, followed by segments about a Sister of the Poor in Jamaica and a Brother of the Good Shepherd who feeds the street people of Toronto, Father Rosica added.

He realized the need to tell such stories during the coverage of St. Mother Teresa’s canonization, he said. During a pause in the ceremony, there came a time for him to fill the silence, and he spoke of the House of Mercy.

"There are lots of St. Teresas in the world, lots doing the same work," Father Rosica said, recounting his words during the broadcast. "And I was just with one of those figures last week in Rochester, N.Y., and her name is Sister Grace Miller. I just said it."

When he said those same words during his Nov. 6 homily, everyone broke out in applause. In the days following the canonization, he said he was repeatedly asked about Sister Miller.

"The world was listening," he said. "What she does is exactly the work of Jesus. … It’s what we’re all called to do no matter how rich or poor or how fancy we are, we are dong the work of Jesus. You dismiss nobody. You discard nobody."

Father Rosica said that Pope Francis spoke of this kind of mercy on Nov. 6 during a jubilee Mass for prisoners.

"Nobody is excluded from God’s mercy," Father Rosica said the pope spoke of in his homily. "Pope Francis reminded us that the House of Mercy exists everywhere. Mother Teresa reminded us that Calcutta is everywhere. Calcutta is on Hudson Avenue in Rochester, N.Y. … Who would believe in the city I grew up in that we’d have a place like this, a neighborhood like this. This is Calcutta. This is where Jesus is needed. This is where mercy is needed."

Pope Francis also now knows of this House of Mercy, thanks to Sister Miller’s letter, Father Rosica said. He gave Sister Miller a gift from the pope, an icon of the Jubilee Year of Mercy, which brought Sister Miller to tears. He also distributed rosaries blessed by the pope to everyone in attendance at the Nov. 6 Mass.

Following the Mass, Sister Miller said she was overwhelmed by the response from Father Rosica and the pope.

"I’m so pleased that the poor here in Rochester are now known throughout the world," she said. "Today, they are remembered. … I want to cry. I cried during the homily."

Father Rosica also spoke later in the day during a reception at St. John Fisher College for donors to the House of Mercy. A capital campaign to help support the move to Ormond Street has raised about 70 percent of its $5 million goal, Finnigan said.

"I’m used to working on a shoestring budget," Sister Miller noted. "It’s a need. We don’t want to see homeless on the streets."

After the Mass, Father Rosica said Rochester has a long history of generosity and hopes that will repeat itself for the sake of the success of the new House of Mercy, which is expected to house 90 homeless people.

"The church and the community need to rally together to ensure its continuity," he said. "The new building is promising."

William Walker of Rochester said the new building is a dream come true for Sister Miller and himself. The House of Mercy helped him get back on his feet 18 years ago when he was homeless. Since that time, he recovered from substance abuse and has sung in the House of Mercy Choir for the last 14 years.

The choir participated in the Nov. 6 liturgy, and Walker said he was honored to sing for a papal representative.

"He could have gone anywhere in Rochester, but he chose to come here," Walker said of Father Rosica’s visit. "It’s fantastic. It’s a godly move."