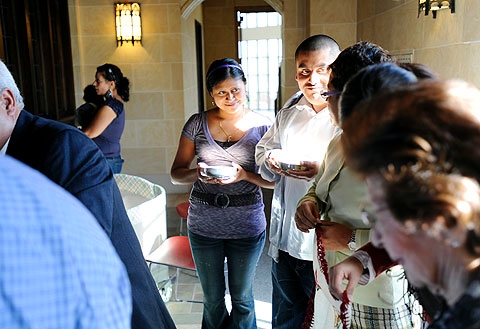 Diocesan officials are embarking on a mission to better serve Hispanics throughout the diocese’s 12 counties by bringing the power to the people.

Coordinators will be trained this month to guide parishioners who have volunteered to take part in an "Encuentro" process by facilitating brainstorming sessions at their churches, explained Lynette Saenz, the diocese’s coordinator of urban ministry. And those initial participants will be invited back in the fall to offer input on a final plan that is expected to better meet the needs of Latino Catholics whether they live in the city, the suburbs or the rural areas, Saenz added. That plan will be presented to the bishop for final approval.

"This is a very educational process," said Ana Gloria Linares, a consultant with the Southeast Pastoral Institute, who was expected to train the coordinators this weekend. "People earn ownership of the process. They contribute to it. It’s not something that’s imposed on them."

The coordinator work will include taking notes on his/her group’s goals and recommendations and preparing a report with suggested action steps, she said.

Linares traveled to Rochester from St. Augustine, Fla., in early April to meet with diocesan staff who will comprise the core team that will review all the reports prepared by the parish teams. The core team members are Saenz; Bernard Grizard, director of diocesan Parish Support Ministries; Brother Juan Lozada, coordinator of the Spanish Apostolate; Sister of Mercy Janet Korn, coordinator of urban ministry/Asian and Pacific Apostolate; and Sister of St. Joseph Patricia Schoelles, president of St. Bernard School of Theology and Ministry in Pittsford.

"It’s exciting," Saenz said of the process. "This is from the grassroots up."

The process will focus on six key areas:

The diocese needs a process like this because for the more than 50 years Hispanic ministry has been in place, there has never been a pastoral plan developed in such a manner, Saenz said. Programs and ideas came from whoever occupied the Hispanic Apostolate office, and a lot of the ministry has been concentrated in the city, she noted.

"But really, Hispanic ministry has changed drastically," Saenz observed, adding that the Hispanic population has migrated to the suburbs, particularly Greece, Irondequoit and Henrietta.

"We need to be able to serve those needs as well," Saenz said.

Father Paul English, who is in residence at Blessed Kateri Tekakwitha Parish in Irondequoit, said that he is happy that the diocese is working to address the needs of Latinos in the suburbs, since the urban and migrant ministries are strong.

"This will help all parishes in suburbs, number one because they will be aware how many people come from Latino backgrounds," he added. "And number two, it will start to develop some kind of activities and ministries that will be helpful and enjoyable for this part of our congregation."

Even in the areas that the diocese does have active Hispanic ministry, the segment of population that is in contact with the ministry is small and becomes even smaller in the suburban and rural areas, Grizard explained.

"We need a new formation … of this new evangelization and how to get together and unite," remarked Sister Luci Romero, migrant minister in Wayne County.

Evangelization also will be a very important part of the process, noted Daniel Ruiz, a seminarian from Colombia.

"I’m more concerned about those not in church than those in church," he said. "We need to open it (the Encuentro process) up to the community."

The Encuentro process usually takes about six months, according to Linares, who was recommended to the diocese and has done consulting for dioceses in Florida, Georgia and Virginia. Saenz would like to see the small group discussions begin in early summer before people go away on extended vacations, she said, noting that the goal for the entire process is to unveil the final plan during Hispanic Heritage month, which is celebrated Sept. 15 to Oct. 15.

The beauty of the Encuentro process is that each plan is unique to each diocese, Linares said.