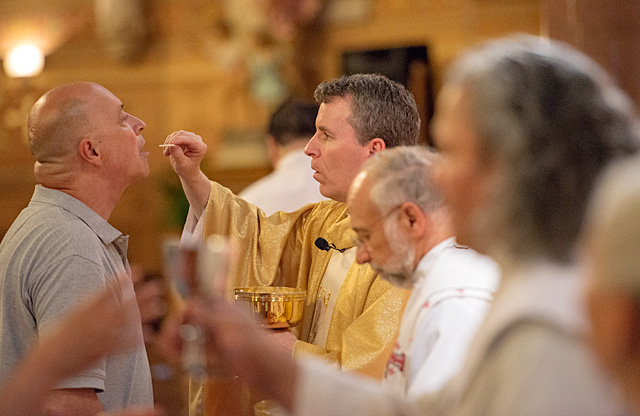 In an effort "to assist diocesan parishes and institutions to fulfill their mandate to proclaim Jesus Christ in Word and to strengthen the faithful in Sacrament," Bishop Salvatore R. Matano promulgated Policies for the Administration of the Sacraments in the Diocese of Rochester on Sept. 30.

The policies address the sacraments of baptism, holy Eucharist, confirmation and penance/reconciliation, replacing all previously issued diocesan guidelines on those sacraments. Also included are directives on such topics as sacramental preparation for children and young adults, liturgical practices and establishing a lifelong relationship with the church.

The document is the result of numerous meetings and discussions that began in 2012 among diocesan and parish leaders. Bishop Matano explained that updating the policies was less about making changes than serving to clarify pre-existing sacramental norms and compile them in a comprehensive document, so that diocesan parishes can refer to and implement the standards more uniformly.

Mary Dundas, diocesan coordinator of evangelization and sacramental catechesis, noted that she had begun having discussions with parish catechetical leaders and youth ministers in the spring of 2012 about whether current efforts to prepare confirmation candidates were as fruitful as they could be. By the fall of 2013, the diocesan Department of Evangelization and Catechesis had expanded the scope of these discussions to also include baptism, first reconciliation and first Eucharist.

Dundas acknowledged that parishes might need to update their programs as a result of some revised policies, but noted that church law guiding them "is not new but is being re-emphasized. It is not a change in the expectation of the church."

Noting that the sacramental policies are "an extension of the teaching office of the bishop," Bishop Matano said he has welcomed the revision process as "an opportunity for the diocesan bishop, who’s new, to engage the diocesan leadership and parishes in a better understanding of our faith so we can be true heralds of the Gospel."

Among the notable aspects of the policy updates are the following:

* Confirmation: As of September 2015, diocesan youths will begin preparation for this sacrament no earlier than eighth grade and engage in a two-year formation process. A pilot program using these criteria was begun in 11 diocesan parishes in the summer of 2014.

Dundas noted that the diocese is now seeking a minimum grade level for starting formation for confirmation, whereas the determination of readiness previously was left up to parents and parishes, with some children being confirmed as early as age 7.

"One of the things the parish staffs said was that a consistency and a focus in the formation of young people across the diocese would be helpful," Dundas said, adding that "these two years of formation are becoming more defined, more substantial."

Confirmation preparation in eighth and ninth grades "almost mirrors one’s development in school. You continue to mature," Bishop Matano said, adding that "the church’s efforts to accompany candidates during the transition between middle school and high school expresses the hope that young people will remain active Catholics as they move toward adulthood."

* Penance: Preparation for receiving this sacrament should begin near age 7. The celebration of first penance must take place prior to first Eucharist as specified in the Code of Canon Law, No. 914, and the Catechism of the Catholic Church, No. 1457.

* Eucharist: As with first penance, candidacy for receiving first Eucharist begins at the age of reason, which is considered age 7.

In a related update, the policies state that newly commissioned extraordinary ministers of holy Communion must be men and women age 16 or older who participate in training and are missioned by the bishop.

"The privilege of distributing Holy Communion, whether the Sacred Host or the Precious Blood, is not simply a ministry among many others, as important as others may be," Bishop Matano wrote in an addendum to policies on the selection, preparation and missioning of extraordinary ministers. "Distributing Holy Communion is a great service to the Church, giving the Church’s greatest gift to our brothers and sisters in the family of God."

Citing Redemptionis Sacramentum — the liturgical directive issued by the Holy See in 2004 — the policies also note that the homily at Mass is reserved to the priest or deacon. According to the universal law of the church, preaching by non-ordained people is only permitted in a church or oratory outside of Mass and in accordance with the Code of Canon Law, Nos. 766 and 767.1.