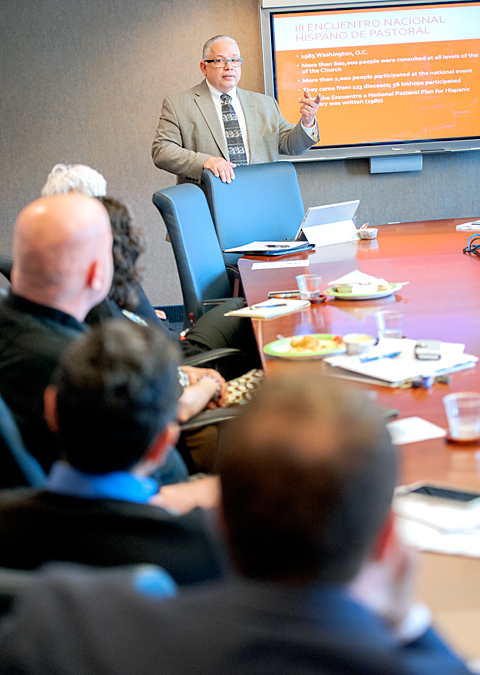 The Diocese of Rochester has begun planning its participation in the first national encuentro to take place in three decades.

A large counter on the website of the V National Encuentro of Hispanic/Latino Ministry (http://vencuentro.org) notes that the event will take place in more than two years and four months, as of press time for this issue.

The Catholic Church has used the process of encuentro — a gathering for spiritual discernment and reflection — to develop Hispanic ministry over the last 40 years, according to information provided on the website by ENAVE, the National Team of Accompaniment organizing the event. "Missionary Disciples: Witnesses of God’s Love" is the theme for the 2018 national encuentro, which is to take place in Grapevine, Texas.

Three of the previous national encuentros taking place in 1972, 1975-77 and 1982-85 brought about significant changes in how the church has responded to Hispanics and how Hispanics have responded to the church, diocesan officials said. The second led to the creation of eight regional offices for Hispanic affairs, and the third developed the National Pastoral Plan for Hispanic Ministry, which provided a vision for dioceses and parishes to respond to the growing Hispanic presence in the church, according to http://vencuentro.org.

"This (national encuentro) is not just for the Hispanic community," noted Lynette Saenz, director of the Cultural Diversity Office for the Diocese of Rochester. "This is for the whole church. … Everyone is invited to be part of this process."

Last month, directors from all of the Diocese of Rochester’s ministry areas — not just ministries related to Latinos — participated in an orientation to prepare them for the encuentro process. Saenz said the orientation was led by Rudy Vargas IV, a pastoral associate from the Diocese of Brooklyn and former director of the Northeast Hispanic Catholic Center, who also conducted a workshop for leaders in Latino ministry and members of the diocese’s Hispanic Commission. The orientation included a review of the encuentro movement’s history, framework, spirituality and theological principles, she explained.

* leading and accompanying diocesan parishes as they begin preparing for parish-level encuentros scheduled to take place in 2017;

* planning and presenting a diocesan encuentro during the second half of 2017;

* selecting and coordinating the Diocese of Rochester’s delegation to the national encuentro.

Saenz explained that the parish-level encuentros in 2017 will focus on these five themes: called to a loving encounter with Jesus; with words and actions: do it; walking along with Jesus, bearing fruits of new life; and celebrating the joy of being missionary disciples.

"The whole process starts at the parish level," Saenz noted, adding that grassroots ideas will be incorporated in the 2018 national encuentro.

The goals for the national encuentros have evolved over the years, she said. The first three were similar in their in-depth focus on evangelization, consultation and leadership development. A gathering in 2000 was technically the fourth national encuentro, but Saenz said it lacked a full discernment process and did not involve the whole church, as had the three prior events. And a special National Encuentro for Hispanic Youth and Young Adult Ministry was presented in 2005 to find ways to reach out to Hispanic youths, Saenz added.

The 2018 national encuentro is designed to discern how communities can better respond to the growing Latino presence in the church and society, and how Latinos can respond to the call of the new evangelization by becoming missionary disciples to serve the entire church. These goals tie in with Pope Francis’ call for all Catholics to serve as missionaries and evangelize, Saenz added.

"Everything the pope is talking about (is) about going into the periphery and reaching out to those who are marginalized, of which Latinos are included," she noted.

The 2018 national encuentro also serves as a call for the Catholic Church in the United States to further develop bonds with the Latino community based on consultation and planning in parishes and the diocese, noted Miriam Rosa. Rosa is a member of the diocesan Hispanic Commission, which is an advisory group established as part of the diocese’s 2013 Hispanic Ministry Plan.

"This encuentro, like the ones in the past, will continue helping the Latino community grow spiritually," Rosa added. "The entire church will unite to hear our voice."