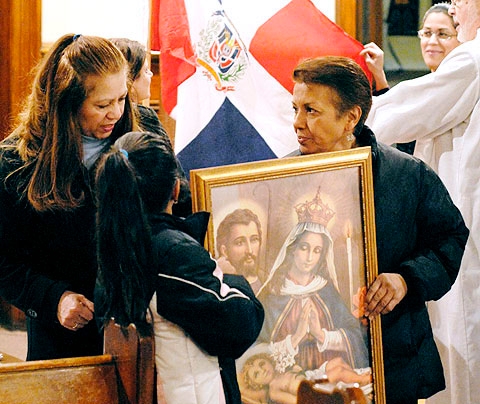 ROCHESTER — Devotion to Our Lady of Altagracia, the protectoress of the Dominican Republic, remains so strong that some people on the island will make promises to Mary and walk on their knees to the basilica in her honor in the city of Higüey.

Rosa Estrella explained the devotion following the annual Mass in honor of Our Lady of Altagracia held Jan. 20 at Holy Apostles Church. Estrella was one of many natives of the Dominican Republic who attended the Mass, including Amada Belliard and her 9-year-old granddaughter, Kiara Belliard. The duo carried the Altagracia portrait during the opening procession and placed it on the altar. Patria Reyes carried the island’s flag, which was draped over the image.

"We’ve always had this tradition" of honoring Altagracia through Masses and rosaries, noted Amada Belliard, who added that Altagracia is even her middle name.

And Mary’s protection of the faithful is why such devotions to her are so important, Carlos González, a seminarian visiting from the Diocese of Ponce, Puerto Rico, explained in his homily.

"We are her children, and as Catholic Christians we must venerate her, love her, defend her and always ask for her blessing and protection," he added. "As the mother of God and our mother."

The Dominican Republic also is doubly blessed when it comes to the Virgin Mary, he added. Not only does Our Lady of Altagracia serve as the island’s protectoress, but Our Lady of Merced is the country’s patroness, he said.

"It is a gift for everyone," González remarked. "For Dominicans as well as for us all."

He then implored the nearly 100 people gathered before him to open their hearts to Altagracia because she also is a mother who never abandons her children.

During the convocation that followed the Mass, González said that he has been fortunate to have been received so warmly by the Latino community in the Rochester Diocese. A native of Salinas, Puerto Rico, he traveled to Rochester last year to stay with a cousin and receive medical treatment at Strong Hospital for a condition he said is improving.

He hopes to return to Puerto Rico sometime this year to continue his studies in, he added.

He first got to know parishioners at St. Michael Church during retreats he participated in there, González explained. Some of the parishioners who heard him speak during those retreats asked him to give the homily for the Altagracia Mass, he said.

"By God’s grace, I feel as if I’m with family," González remarked. "It’s an amazing feeling to be part of a community … that has opened its arms to me as if I were a member of the family."