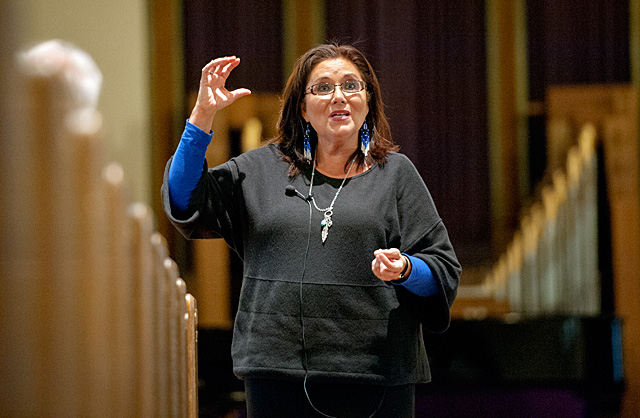 PITTSFORD — For human beings, an encounter with a person of another culture often raises the question of which culture is better or worse.

But humans could instead look at the encounter in a more positive way, said Jeanette Rodríguez, who spoke at Nazareth College March 20 in the first of two lectures sponsored by the William H. Shannon Chair in Catholic Studies.

"What contribution does this encounter make to my understanding of God?" is one alternative reflection, she said. "Maybe then we’d grow as a people of this earth."

Rodríguez is a professor of theology and religious studies in Seattle University’s Women and Gender Studies program and in the Graduate School of Theology and Ministry. She also founded the Center for the Study of Justice and Society.

She is the author of several books including Our Lady of Guadalupe: Faith and Empowerment Among Mexican American Women. Rodríguez has collected women’s stories from Mexican-American women, Mayan women in Mexico, women living in small Christian communities in El Salvador and the Yaqui community of Arizona as they work to recover their cultural memories and identities. Most recently, she has worked with the clan mothers of the Haudenosaunee in Canada and the United States.

The concept of cultural memory, which was the theme of her first lecture, was first raised for her in college. After she spoke to her parents about a course she was taking on the Holocaust, her mother turned to her father and said: "Sangre llama sangre. Dile la verdad." ("Blood calls blood. Tell her the truth.")

"As it turns out, my father was Jewish," even though she had until that point thought he was Catholic, Rodríguez said.

Suddenly, she said that her father’s hourlong prayers from the Hebrew scriptures and the yamaka in his drawer made sense. He never chose to talk about this part of him, though, and that bothered her, she noted.

But the experience set her on a path to learn more about cultural memories, which she said are the transformative historical experiences that define a culture even as time passes and it adapts to new influences.

One of the best examples of cultural memory is Our Lady of Guadalupe, said Rodríguez, who is coauthor of "Cultural Memory Resistance, Faith and Identity."

"In Mexico, they said that not everyone is Catholic but we are all Guadalupanos," she said. "Cultural memory transmits an experience and is rooted in history."

Mary’s appearance in 1531 came a decade after the Spaniards had conquered the Aztec people. The indigenous people were told everything was false about their world view, even though they had lived their lives always in consultation with their gods, she explained.

"If the gods had abandoned them, they didn’t want to live," Rodríguez said.

Christians can relate to this sense of loss in the story of Abraham, who was forced to leave his land to follow God, she said. Her own mother said she felt the blood drain from her body the minute she touched U.S. soil from her native Ecuador.

So, when the Spanish friars attempted to teach the Aztecs about Christ, the people were obviously confused and anguished. They wondered how Christ allowed for the rape of Aztec women or how there could only be a God the Father without a God the Mother, Rodríguez explained.

From this place of confusion, Juan Diego enters the picture and Mary appears to him as a mestiza — a women of Spanish and indigenous blood — and speaks in his native language, Rodríguez said. Mary’s message of compassion and accompaniment made such an impact that 9 million baptisms were recorded in the six years following her appearance, she said.

"Given the historical context of the time, you can see how important her message was," Rodríguez noted. "She gives them (indigenous people) a place in a world that has rejected them."

Shirley Sommers, an assistant professor of education, was not familiar with the Guadalupe story, which she said "was really powerful for a non-Catholic."

"You see the image everywhere," she added.

Shelly Knight said that she was inspired by Rodríguez’s discussion about Guadalupe.

"It’s always important to have someone like (Guadalupe) to really look to" on one’s faith journey, said Knight, a senior studying anthropology and religious studies.

Rodríguez’s presentation was part of the Shannon Lecture series’ goal to "continue to bring to the podium individuals whose lives and works invite us to explore Catholicism as a living tradition … and always especially mindful of the call to justice," said Christine Bochen, chairwoman of the Shannon department.