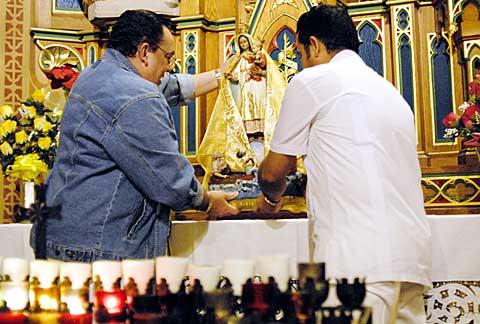 ROCHESTER — Taking part in the celebration of Our Lady of Caridad de Cobre, the patroness of Cuba, served as a special reminder of his native country for Angel Arza.

Having lived in Rochester for only a year, Arza recounted how important a day Sept. 8 is for Catholics in Cuba. He said that they perform acts of mercy, such as visiting prisoners, as well as celebrate Masses all over the country from chapels in small towns to churches in the Archdiocese of Santiago. And those Masses likely coincided with the celebration at St. Michael Church, Arza noted.

Arza was one of more than 60 people who came out to celebrate the feast day in Rochester. During the procession, Esther and Frank Solaun of Cuba carried the country’s flag and placed it on the steps in front of the altar, upon which wooden boards were placed that were topped by a statue of Mary covered in a golden veil. Several parishioners also placed vases of colorful flowers in front of the statue.

During his homily, Brother Juan Lozada, director of the diocese’s Spanish Apostolate, shared the story of Our Lady of Caridad de Cobre, "el corazon del pueblo cubano," he said. According to www.marypages.com/LadyCaridadDelCobre.htm, two island native boys went out on a canoe in the Caribbean Sea with an African boy — they are affectionately known as the "Three Juanes," said Brother Lozada — and encountered a storm in the early 1600s in the Nipe Bay.

Once the seas had calmed, the boys found a statue floating in the water on a board that bore the inscription, "I am the Virgin of Charity," and were surprised that it was not wet, explained Brother Lozada explained. They recognized the image as that of the Virgin Mary holding the baby Jesus, he said.

A sanctuary was built in El Cobre and she was named patroness of Cuba in 1916. According to the website, Pope John Paul II crowned her queen and patron saint during his apostolic visit to Santiago in January 1998. Another major celebration will take place in 2012 for the 400th anniversary of her appearance, Arza added.

Brother Lozada related the exiled Cubans’ experience to what God has called many — including Mary and Abraham and Jesus’ disciples — to do in the Bible: leave behind all that they know to serve God.

But they need not fear of the family and friends left behind in Cuba if they believe in God’s words as Mary did, Brother Lozada remarked.