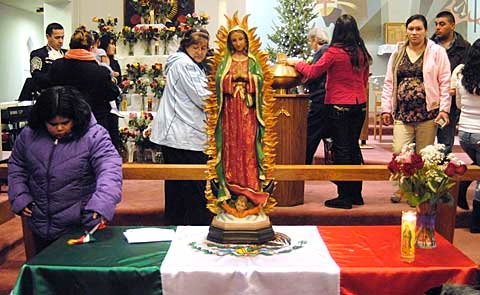 The Hispanic and Anglo communities at Our Lady of the Americas Parish came together on Dec. 12 to celebrate the feast day of Our Lady of Guadalupe.

The bilingual Mass featured choirs from the regular English and Spanish Masses, and a traditional presentation of roses, which were placed under an image of Guadalupe that came from Mexico.

"Guadalupe is the feast of the patroness of North and South America and all its islands," explained Father Vincent Panepinto, sacramental minister at Our Lady of the Americas, during a homily preached in English and Spanish. "Her words are tender words, healing words, words of a place to come."

Father Panepinto added that Our Lady of Guadalupe, who appeared to Juan Diego on the Tepeyac hillside of Mexico City in 1531 as a pregnant indigenous woman, represents a bridge between rich and poor, the conquerors and the conquered, and the Anglos and natives.

"She is the greatest of the Advent prophets who calls us … to be a bridge in America today."

The Dec. 12 Mass at Our Lady of the Americas was the second Guadalupe celebration; another Mass was also celebrated there for the Rochester area Latino community on Dec. 10. Masses in for the Guadalupe feast also took place Dec. 12 at St. Joseph Church in Penfield, St. Francis de Sales Church in Geneva and Our Lady of Guadalupe Mission at St. Gregory’s in Marion. The Marion site also hosted pre-dawn prayer services known as Las Mañanitas.