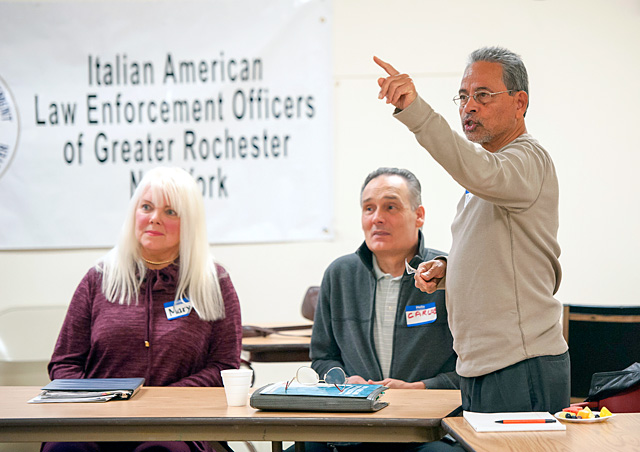 ROCHESTER — The 27 religious congregations of Rochester ACTS are speaking out against fliers left in driveways in Pittsford and Brighton earlier this fall, directing residents to a white supremacist website.

In response, several clergy members spoke out during an Oct. 18 press conference at Trinity Emmanuel Presbyterian Church on Shelter Street.

"Our (faith) community, while often historically seen as white, is not in any way welcomed by the people who want a white Rochester, thank goodness," said Rabbi Drorah Setel of Temple Emanu-El in Irondequoit. "(This incident) is an opportunity for us to come together and proclaim the unity of our human being, of our creation together and our city of Rochester."

But Wilma Campbell, a Quaker, said she worries that the racist leafleting campaign could mark a tipping point, pushing the community toward the kind of uprisings Rochester has not seen since 1964. She asserted that the city is already close to turning into another Ferguson, Mo., which exploded in violence in 2014 after Michael Brown was killed by a police officer in that city.

"Rochester is on the precipice of the very same cliff," Campbell said Oct. 18. "And the issue of race is really, really something that we concocted (as humans). Race is not real. Skin color is just a variation, really. … We are all the same."

Racism of any kind is unacceptable, said Michael Mills of PittsForward, a group that formed after the white-supremacy fliers were left in town driveways. The group subsequently held a unity rally in the Village of Pittsford in late September and has formed a steering committee to plan future events, Mills said Oct. 18.

"Our goal is to create a place where we can have a dialogue about these issues and find out (how) we can respond both interpersonally and institutionally to make Pittsford and the larger Rochester community the place where we all want to live," Mills said of the new group’s mission. "We’re doing our part to make sure (racism) is not acceptable in our community."

To offer other opportunities for community dialogue, Roc ACTS has been offering Sacred Conversations on Race throughout this year, explained Campbell, who oversees the initiative that originated in Ferguson to help neighbors in different communities interact.

"Sacred Conversations is a good approach because it helps people who are different come together," noted Deacon David Palma, a pastoral associate for social ministry and civic engagement for the Southeast Rochester Catholic Communities of Blessed Sacrament, St. Boniface and St. Mary churches. "Because once you get to know someone, we’re all able to change."

Several faith communities presented Sacred Conversations in Rochester Nov. 5. At Church of the Annunciation, parishioners from St. Frances Xavier Cabrini and Peace of Christ spent the morning sharing their own experiences with racism..

Carlos García, who leads Roc ACTS, spoke of taking his son to the first day of kindergarten at a suburban school 23 years ago and hearing the response of a staff person when his son — who was blond at the time and blue eyed — introduced himself.

"She looks at him … and she says to him, ‘Mike García? We weren’t expecting you,’" recounted García, who noted that the incident has stayed with him. "Who were they expecting? … (Racism) is not just black and white. There’s a lot more to it.

As a Latina with darker skin, Epifania DeJesús said she experienced blatant racism during her first attempt to obtain an apartment when she moved to Rochester decades ago. During a large group discussion Nov. 5, the St. Michael Church parishioner said she never forgot the incident, but said she channeled her anger into a lifetime commitment to fight for justice.

"This is what I learned is don’t judge everybody for their color. Don’t judge everybody for how they see you," she said. "Have respect. … Sometimes the best thing to say is, ‘Por guy, they don’t know me, they lose.’ Because when I take the time to know that person, that person, that person, maybe I teach myself much more. And that’s what I choose to do. I don’t want to stay down. I need to come up. One step at a time, we can make it. … But we have to do it together."

Campbell noted that housing discrimination and racial dissension were among the causes of the Rochester riots in 1964. Having lived through those events, she said she is disheartened to see that community relations with police have deteriorated and the concentration of poverty has maintained a choke hold in the city.

"Start at Monroe and Main in Pittsford and drive down Monroe (in Rochester), or start at South Clinton Avenue and drive north and the color of the people changes," she said. "You ask what caused (the) ’64 (riots), and it was the huge division and separation of people for jobs and housing."

Part of the reason those divisions persist is that overt racism went underground for a period, while institutional racism persisted — in business, housing and education, for example, said Karen Costello, a parishioner of St. James Church in Irondequoit who attended the Sacred Conversations on Nov. 5.

"Many people don’t understand how they contribute to the problem and … (that awareness) is the key component to the work on dismantling systemic racism," she said. "Actions can be as simple as knowing what to say in the face of racist comments."

In conjunction with raising awareness, another option is to pressure government officials to increase the minimum wage and provide funding for child care, said Costello, who also chairs the education task force for ROC ACTS. Such measures would help lower-income families become more financially stable and create racial justice, she noted.

The group will choose its specific actions during the second session of the two-part Sacred Conversations that was to be held Nov. 12, Campbell noted.

"What we’re trying to do is get people to work together in churches, synagogues or temples," she said. "This is not just about having conversations. It’s about building relationships across racial, ethnic, cultural lines. Only when you talk to people in an authentic way, when you work with people, rub shoulders, get to know people as humans, that’s when the ‘other’ stuff falls away."