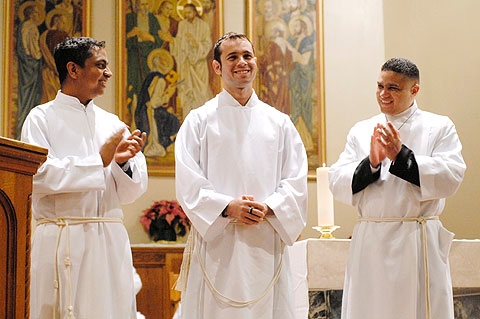 ROCHESTER — A three-year collaboration with the Diocese of Medellín in Colombia will begin to produce fruits this spring.

Sergio Chávez, now in his third year of studies at Theological College at the Catholic University of America in Washington, D.C., is scheduled to be ordained a transitional deacon in June by Bishop Matthew H. Clark as he continues working toward priestly ordination, according to Bernard Grizard, diocesan director of Parish Support Ministries.

Bishop Clark, who will submit his retirement this coming July in accord with church law, "is the one who began all of this," noted Brother Juan Lozada, director of the Spanish Apostolate in Rochester and liaison between the Rochester and Medellín dioceses. "That he is able to ordain (Chávez) before he retires is perfect timing."

The collaboration took form after Father Edwin Gómez of Colombia — who is now working in Worchester, Massachusetts — led the 2008 annual Santa Misión, a weeklong summer retreat for Rochester’s Spanish-speaking parishioners. His visit led to talks about the process that had brought Father Gómez to Worchester. The following spring, Brother Lozada and Father James Schwartz, diocesan director of vocations, traveled to Medellín and interviewed seminary candidates for the Rochester Diocese.

Chávez was among the initial group who traveled to Rochester to learn English. Upon completing his first year of studies, he traveled back to Colombia, returning to Rochester with Jorge Ramírez, who is now continuing his theological studies at St. Mary’s Seminary University in Baltimore, Grizard said.

In early February, Brother Lozada was to travel to Baltimore in support of Ramírez as he received the order of acolyte.

"(Acolyte) is a minor order, and I move one step closer to the priesthood," Ramírez wrote in a Facebook message for this story.

Another Colombian seminarian, Carlos Mario Sánchez Betancur, who arrived here last year, is completing his pastoral year at St. Louis Church in Pittsford. Carlos Alberto Builes Gil, who spent time at Our Lady of the Americas Church, has returned to Colombia and may return at a later date, said Grizard.

He said these seminarians are unique because Ruiz-Sierra was almost fully bilingual when he arrived in Rochester and Valle has been gaining fluency quickly.

Instead of devoting all their class time to learning English — as had been done for the earlier seminarians at St. Bernard’s School of Theology and Ministry — the diocese chose to enroll these men in a multicultural program at Nazareth with other international students, he explained. Brother Lozada added that the Nazareth program has been very good for the seminarians because it enables them to get to know other peopele who are adapting to a new culture.

The Nazareth program also gives the men greater access to day trips to stores, restaurants and other parts of the region to help with "acculturation" while they live at Becket Hall, the diocesan residential program for those discerning priestly vocations, noted Grizard.

In addition to their classes at Nazareth, the diocese also has offered workshops to help the seminarians — as well as international priests, known as "externs," working in local churches — learn about the different cultures represented throughout the region, Brizard said.

Offering such workshops is "usually what we do when they (seminarians and externs) first arrive to inculturate them and give them an idea of what to expect along the way," noted Brother Lozada.

Although Viloria arrived only last month, he also has enrolled at Nazareth after taking theology courses in Colombia last fall that so he would not fall too far behind Valle and Ruiz-Sierra, Grizard explained.

Viloria said that he felt the call to priesthood at age 17 because of the example set by a priest in his parish. He comes from a family of seven children who, along with his parents, fully support his decision to not only become a priest but do so in another country, added Viloria, 30.

For Valle, who also is 30, the call came when he was a young child, he said.

"In all areas of my development — personally, socially, religiously and culturally — I have been very aware that there exists a God above all others," he remarked. "And since that moment when I felt called by him, he has stood by me in all areas of my life."

In an e-mail, Ruiz-Sierra said that he attended a Jesuit high school in Medellín after attending the Columbus School where he had learned English. Through prayer, retreats and service to the poor during those high school years, Ruiz-Sierra said he found God and eventually decided to follow that call.

He studied economics at Eafit University and then joined the Jesuits working with the poor in several cities in Colombia. Later, he studied philosophy at the Pontifical Xaverian University in Bogotá — where Valle also studied — and at the University of Antioquia. In 2010, he reached out to Father Gómez to discuss the priesthood and was referred to Father Fernando Bernal, who also referred the other Colombian seminarians who have come to the Rochester Diocese.

With support from his parents and three siblings, Ruiz-Sierra said that he found himself on a plane to Rochester last August along with Valle, who said he comes from a close family that has always been strong in the faith.

"Our parents always supported us in all our life decisions, me especially with this major choice to enter religious life and move to another country, which was an emotionally charged situation," he added. "But my parents and (four) brothers and sisters always stood by me in these important decisions."

All three men said they have been welcomed by people from throughout the diocese, which has made their transition easier, even while learning a language Valle described as "very different" from their native tongue.

"Here, I have encountered a community that is committed to its faith, open and welcoming that has offered much support in this process of adapting to a new culture as well as have all the people who work in vocations and (priest) formation in the diocese," Ruiz-Sierra stated.