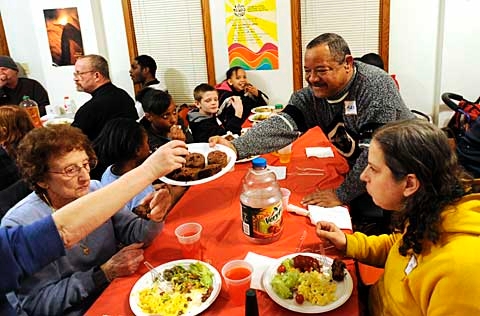 ROCHESTER — The employment ad read: "Do you believe in winning the world for Christ? Do you believe in sharing the Good News of Our Faith with the unchurched? … Bilingual a plus. A ‘heart of love’ a must!"

For Tiffiney Taylor and Puerto Rico natives Becky Colón and Alex Cintrón, the answer was a resounding yes. The trio began its work last month as Holy Apostles Church’s missionary coordinators. Colón and Cintrón are so dedicated to this newly created mission that Cintrón is doing the work on a volunteer basis, said Father Tony Mugavero, the parish’s pastor.

"You get Becky and you get Alex," said Father Mugavero during an interview on Feb. 17. "They have the gift of music ministry … and spreading the Gospel."

He explained that the idea for this evangelization ministry came out discussions about the ministries currently offered by the church, including its Spanish ministry, clothing room and faith formation.

"I did say to myself, ‘Does this position us to be everything we need to be?’" he noted. "Or is Holy Apostles called to something … different?"

The team, which began its work in January, will seek to meet the needs of the residents in its surrounding neighborhoods — whether those needs are physical, mental or spiritual — all in the name of God, Father Mugavero added.

The missionary coordinators initially took time to get to know the church staff and parishioners, because the success of the ministry also depends on the commitment of the parish, which is funding the two part-time position, he said. Additionally, the team has been meeting with representatives of various community agencies to make sure services are not being duplicated, Taylor explained.

"They’re getting ready to hit the turf," Father Mugavero added.

Taylor said that the missionary job appealed to her because she wanted to put an emphasis on spirituality in her work. She had most recently been employed as a social worker for the University of Rochester Medical Center’s development-disabilities clinic.

"The church needs to get out of the traditional way of providing services … outside of its four walls," Taylor remarked. "You have to go out and give yourself to people for people to truly understand that they’re wanted and accepted for who they are."

The model fits in with goals established last year by a diocesan study group on Urban Ministry, said Sister Janet Korn, the diocese’s urban-ministry director. The goals, which a task force is currently working to implement, include establishing new models of faith community as well as focusing on issues of social justice in the city.

"We haven’t gotten yet to discussion groups about new forms of church, but this would fit right into that," Sister Korn added. "It’s something we can add to the conversation and hopefully build on."

This work also is important and unique because the Catholic tradition too often focuses more on meeting such needs as providing clothing or food to residents in the neighborhoods than finding out where they are spiritually, Father Mugavero said.

"Spirituality is a need," he said. "It would be quite unfortunate not to offer what are our values … to the people around us."

This shift in approach is important because the church has long been accustomed to having people fill the pews, Sister Korn said. Church closings in recent years, however, show that those pews are becoming more difficult to fill.

"We’ve never had to do so much outreach," she said. "We need to learn to function out of a different mode. It’s our turn to go to the people."

For Colón and Cintrón, the new ministry also is a continuation of missionary work they began when they were living in Puerto Rico, they said. The pair, who also had been members of the Holy Apostles Spanish choir, were in town for a visit last fall when Father Mugavero approached them about the job.

"So we packed up and came back to Rochester," Cintrón said.

"Blame it on the Holy Spirit," Father Mugavero joked.

This new ministry appealed to them because they saw it as a continuation of missionary work they began when they were living in Puerto Rico, the two said.

"It’s something I always wanted to do," Colón said in describing a 10-day mission trip they took to Santo Domingo in the Dominican Republic. "It touched me."

What was most eye-opening during that trip was the happiness they witnessed among the families they met even though they lived in impoverished conditions, Cintrón added. In the materialistic society of the United States, alternately, many children and families have so much and yet are not happy, he noted.

"These people were so poor … and were so happy," Cintrón remarked. "We saw Jesus through them. We met Jesus in them."

Colón noted that she misses her granddaughter and little home back in Puerto Rico. But through prayer and mediation, Colón said that she realized that "maybe the Lord is calling me back to Rochester."

The team will seek to show their church how God can help them as they steer them to resources that can address whatever other needs they might have, Colón added.

"Little by little, we can introduce how the Lord can help you through ‘fortaleza y fuerza’ (strength and fortitude)," she said.