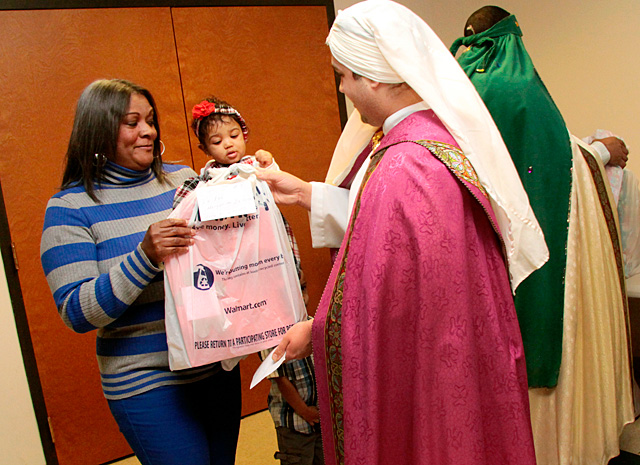 "The Three Kings tradition is much stronger there (in Puerto Rico)," said the Our Lady of Peace parishioner. "It is a big celebration there."

The feast of the Epiphany of the Lord was celebrated at Masses throughout the diocese on Jan. 4. At St. Francis de Sales, parishioners dressed as the kings to give out candy or presents. On the Jan. 6 feast day, Ibero-American Action League’s child-care program staff gave out presents donated by the Rochester Latino Rotary Club. Staff and volunteers from the Avenue D Recreation Center in Rochester also organized a toy drive and presented children with those gifts at Nazareth College’s Casa Hispana.

The feast day has a profound meaning beyond the gifts that the Three Kings deliver, noted Sister of Mercy Kay Schwenzer, a migrant minister in Geneva.

"God loves all his people," she said. "And his love is manifested in Christ as our light and our salvation. … Represented by the Three Kings, God calls us all from all over the world."

At St. Francis de Sales, the festivities began with a Mass celebrated by Father Jesús Flores and continued at the parish hall with a buffet of traditional Latino foods representing the church’s Puerto Rican, the Dominican and Mexican parishioners. The three kings — portrayed by Luis Manuel González, Julio González and Jose Angel Ochoa — led the congregation from the church across the parking lot to the parish center following the Mass.

Julio González said that he is proud to say this was his second year as one of the kings.

"It is something wonderful, something beautiful so that our children can see this tradition of all of our (Latin American) countries," he said.

During the post-Mass gathering, the goal is for the parishioners to get to know one another better, added Rafael Díaz, who was part of the event’s planning committee.

"We get together to share with one another … so that the community becomes more united," he added.