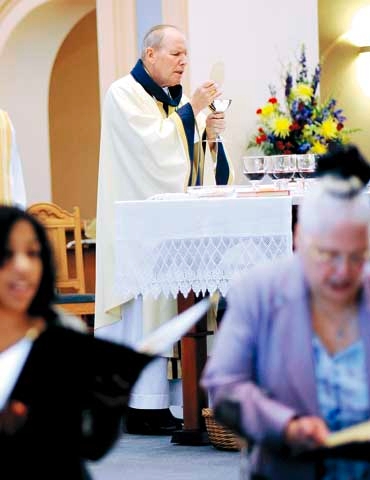 If you’re among the many English-speaking Catholics accustomed to reciting liturgical prayers from memory, you’ll need to invoke your reading skills within the next year. The payoff? A deeper understanding of the celebration of Sunday Eucharist.

In a development that has been in the works for several years, an updated English translation of the Roman Missal will take effect on the first Sunday of Advent in 2011. This new translation approved by the Holy See will result in numerous changes in parts of the Mass spoken and sung by both the priest and congregation.

Catechesis related to the missal changes is already beginning in the Rochester Diocese. Priests and pastoral administrators took part in initial meetings in November 2010, and an introductory video is being released to all parishes in early January with a series of homilies planned throughout February. Instructional efforts will carry through and beyond the implementation date.

The DVD, titled "A Moment of Grace," contains brief messages by Bishop Matthew H. Clark as well as Deacon John Brasley, liaison to the diocesan Office of Liturgy, and Father Robert Kennedy, pastor of Rochester’s Blessed Sacrament Parish. It is intended for viewing during Masses and at gatherings of parish staffs, committees and other groups.

In the video, Bishop Clark points out that this, the third translation of the Roman Missal, will give the English-speaking world an altered version of virtually every prayer prayed at Mass. He acknowledges that these changes will be difficult for many, since they will require a shift from wording that has been in place since the Roman Missal was first translated from Latin to English in the late 1960s. However, Bishop Clark notes that he is committed to fostering a deeper understanding of the centrality of Eucharist as a result of these changes.

The video is designed as "kind of an encouragement and invitation from the bishop to engage in this implementation," according to Bernard Grizard, diocesan director of the Office of Parish Support Ministries, of which the Office of Liturgy is a part.

Introductory educational efforts on the Roman Missal are being broken down into three phases:

Local resources, as well as links to further information provided by the U.S. Conference of Catholic Bishops, are available on the diocesan website at www.dor.org. Grizard and Deacon Brasley said numerous online updates will be issued as the implementation date approaches. Among the other diocesan offerings leading up to that point will be additional homilies, workshops and articles in the Catholic Courier including "Along the Way" columns by Bishop Clark.

All these efforts will help allay fears about the missal revisions, according to Deacon Brasley.

"There seems to be a fair amount of anxiety surrounding the changes," he said, pointing out that "the order of the Mass itself is not changing at all. The words will be different."

Still, when the priest says "The Lord be with you," it will take some adjustment to respond "And with your spirit" rather than "And also with you." And just before Communion, rather than praying "Lord, I am not worthy to receive you" congregations will say "Lord, I am not worthy that you should enter under my roof." Numerous adjustments also are in store for the Gloria, the Nicene Creed and a host of other prayers.

Grizard noted that these changes represent a more literal translation of the original Latin Mass text, and the changes actually had been expected ever since the Mass was first translated to English following the Second Vatican Council.

"We have been living all these years under temporary translations. Over time we took it as the final translation," Grizard remarked.

Deacon Brasley said that having to switch gears with the missal text can be a good thing, pointing out that this "gives parishes a chance to take a new look at the Mass itself, what we’re saying and what it means in our lives."

Meanwhile, Grizard said that the changes in our English-speaking text will bring us more in line with the way the Roman Missal has been translated in other languages. Since the newly revised missal is an English translation, it does not directly affect the Spanish-speaking community in the diocese at this time, Deacon Brasley added. He said that Latino parishioners who attend English Masses or who are interested in learning more about the changes may visit http://usccb.org/romanmissal/espanol2.shtml.