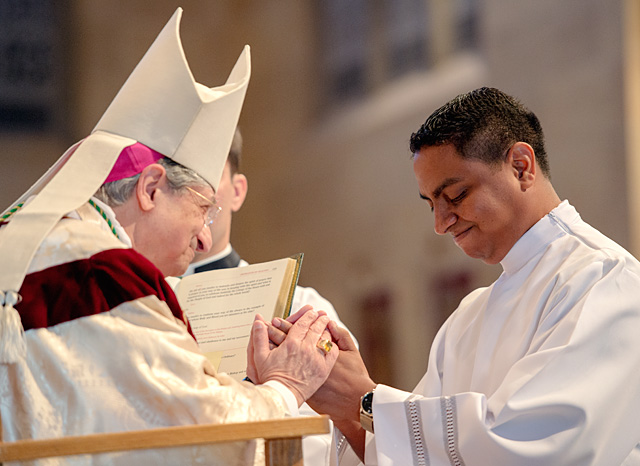 Bishop Salvatore R. Matano told the four men to be ordained as deacons that they are called to be servants of the word of God.

And how appropriate that the June 6 Mass of ordination for Jainer Erick Viloria, Jorge Ivan Ramírez and Justin Miller as transitional deacons and Arthur Cuestas to the permanent diaconate fell on the eve of the feast of Corpus Christi, the bishop added. Holy Eucharist, representing Jesus’ life-giving sacrifice for the world, will provide them strength as they begin their work in ministry, he noted.

The bishop also told them to look at the support around them on this special day and know they are surrounded in love.

"This is your family," said Bishop Matano as he pointed to the congregation gathered before him at Sacred Heart Cathedral. "These are the ones you are called to serve, and blessed be those who believe with their whole heart and soul that Jesus Christ is the savior of humanity."

Following the Mass, Deacon Cuestas said that he felt "overwhelmed" as he stood with his wife, Denise, on the steps of the cathedral. His son, Noah, proclaimed the second reading during the Mass.

"I am overwhelmed by the presence of Christ not only in my life but in our marriage," he added. "I felt God’s presence in both of us and in the ceremony itself."

His wife said that she was humbled by the experience, and to see her husband’s years of formation come to fruition "is a beautiful feeling."

"He really has such a beautiful calling," she said.

Two of the three transitional deacons came to Rochester through a collaboration established in 2009 between the dioceses of Rochester and Medellin, Colombia.

Deacon Ramírez, 34, said that he felt "very happy" not only for the grace of being ordained but because he is continuing "to follow God’s will and to serve the church, specifically the Diocese of Rochester."

He was one of the first two seminarians to participate in the collaboration between the Rochester and Medellin dioceses. Father Sergio Chávez was ordained a priest of the Rochester Diocese last year.

Deacon Ramírez, who will complete his final year of seminary this fall at St. Mary’s Seminary and University in Baltimore, said that he also felt grateful that his aunt, Solangela Velásquez Cardona, traveled from Colombia to share in the joy of his ordination.

Although she said that the ordination was wonderful, Velásquez Cardona added that she also felt a little melancholy because his parents, who are deceased, and his grandmother who helped raise, who also is deceased, him could not be with him on this day. But she also is grateful that he has found a community of people in the parishes he has served that treat him like family, she added.

Although he did not have any family from Colombia with him, Deacon Viloria said that he was grateful that his parish family was with him for the ordination.

He served his pastoral year at Peace of Christ Parish in Rochester and will now serve at Our Lady of Peace Parish in Geneva, he said. He is now in his fourth year at Theological College in Washington, D.C., and may be ordained to the priesthood as early as this fall.

"The Lord never leaves you alone," added Deacon Viloria, who said he often felt tears in his eyes during the Mass. "I left my family (in Colombia). But I found another family and good friends."

Deacon Miller said that he felt blessed upon his ordination. A Springville, N.Y., native and St. John Fisher College graduate, he is in seminary at Theological College.

"It’s a great gift, God’s gift," he added of his ordination.